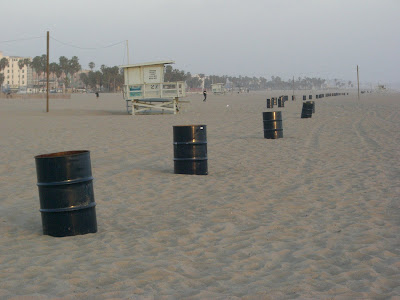 To learn new information and retain it, I believe that people need to feel good about themselves, and what they are learning. At least I believe that this approach is an effective way to teach, but one that is not always possible.
As I sit here and write, I am trying to come up with a way to promote the positive learning I am talking about. However, sometimes there are no easy ways to deliver information that is just a plain ol' bummer. So with that said, I bring you part two of Day 14.
A few startling realizations happened at the end of picking up our trash collection for the day.
1. There are, on average, 10 - 12 trash cans between Life Guard Stations at Ocean Park Beach.
2. They are mostly empty.  They are mostly empty, most of the time. See the picture below. 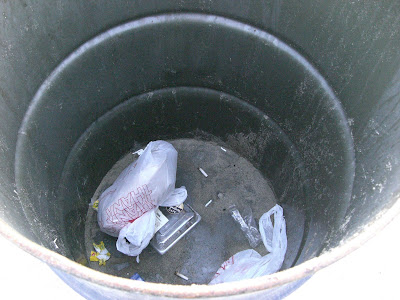 I would like to say that the trash cans are empty because there just isn't a lot of trash on the beach to put in them. That would be a lie. 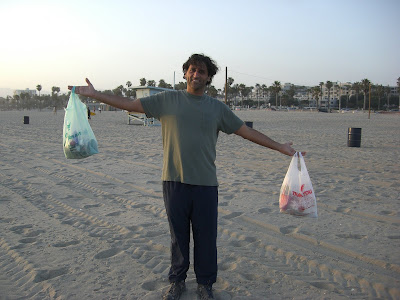 Garen is pretending to be a human scale. But here's the thing, just as we were finishing up, we saw a family's worth of trash spread out on the sand in front of us. We passed them on our collection walk maybe 10 min. earlier. On our way back to parking lot 5 at Ocean Park, we noticed they had eaten on the beach, and left everything.
That's right, all of their plates, and cups, and wrappers, and plastic cutlery. All of it. There were already many Seagulls eating the trash. I had a couple of pieces of Sourdough Bread to feed some birds from the end of a loaf at our house, so I distracted the birds, while Garen cleaned up the mess. And it doubled the amount of trash he collected for the entire 20 min. in one blanket indented spot on the sand.
There's one other thing. The family had seen us pass, and looked at us collect trash off the beach from a very close proximity. (I remember feeling self conscience to collect too close to them because I already saw wrappers lying near them, and I try not to invade people's space while I walk around.) At least, I assume they saw as I passed them closely, and a woman watched what I was doing.
But maybe it didn't register with her. Maybe it didn't make sense at all to see me bent over, and picking cigarette butts from the sand. I like to think that when people act irresponsibly towards the environment, or their community, they do it because they don't know why they need to care yet. When it comes to environmental conservation and stewardship, there are many, many people left to reach. I'd like to think that some people are slower to catch on to what I like to believe is a Green Movement, a Green Revolution! Ha, that would be great, a Green Revolution.
Anyway, I'd like to believe a powerful solution is that we need to keep environmental education going, and raising awareness in our own communities until it travels exponentially through our entire population. Cultural differences be damned!
Because the other alternative is much harder to address than ignorance. The alternative is that this family was too lazy to bring their trash 50 feet to a nearly empty trash can. And that they left everything right there on the beach, and right in front of their children. Ignorance and laziness are two options that I'd rather not choose from at all. But one has a solution, and one is corrosive. 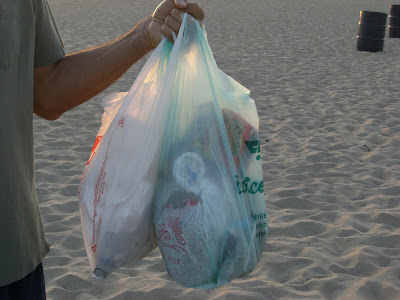 Posted by Sara Bayles at 8:31 PM No comments: Links to this post