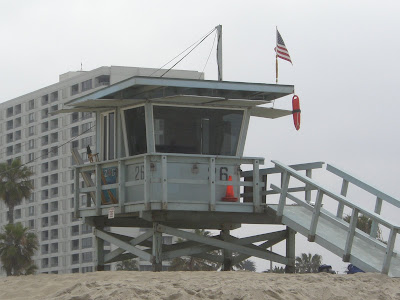 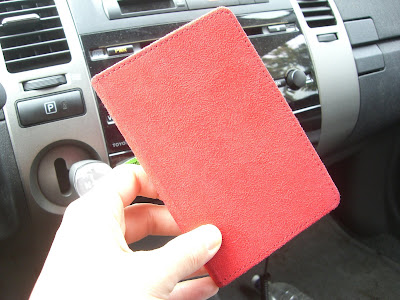 Here is what I do:
I write down in this notebook, the weight for the trash collected, the date, where I am, and any thoughts/notes I have for posting later. 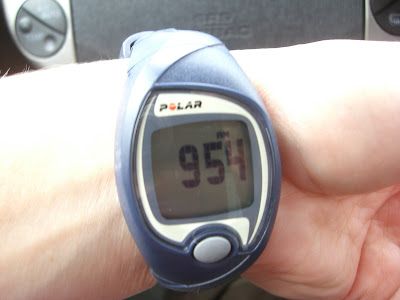 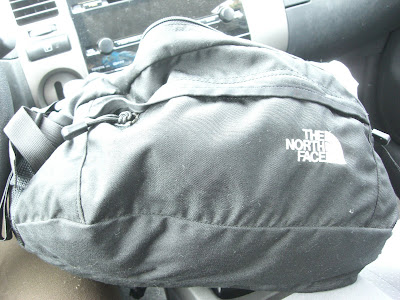 In this bag is my kit of what I need.
-bags for collecting trash
-camera
-pens/pencil
-notebook
-dollars for the parking meter
-sanitary wipes for my hands when I am done
-gloves
-my car keys when I am on the beach 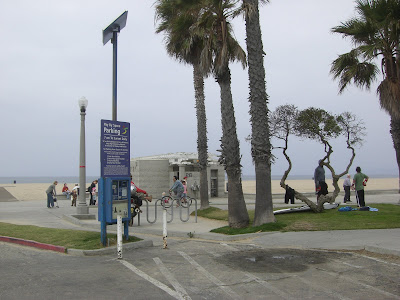 Here's the parking lot I use. 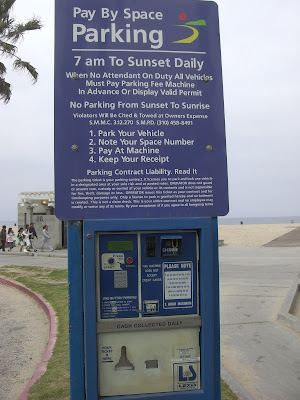 And the meter I feed for my ticket which, once printed, I take back to display on my dashboard. 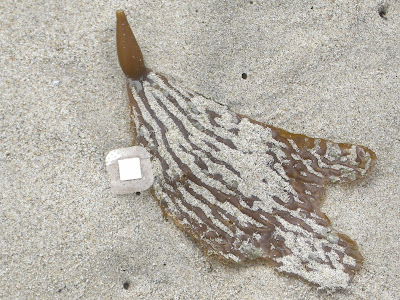 Then I start taking pictures when I find something picture worthy. Today I found a few band-aids. This shot had the best composition. 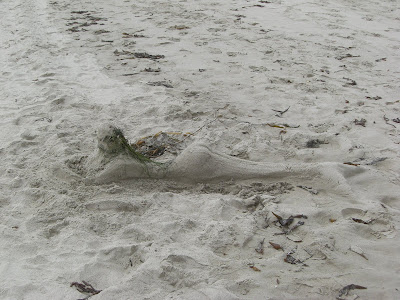 I liked this sand sculpture mermaid because she had been sculpted and nearly washed out, but her tail lasted even though the tide-line was right above it. 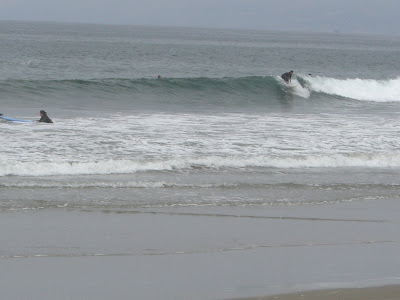 Surfers. This looks like a great place to learn. Lots of big spongy boards and people who don't take themselves too seriously. But sadly, I wouldn't swim here. Not after seeing what I've found. 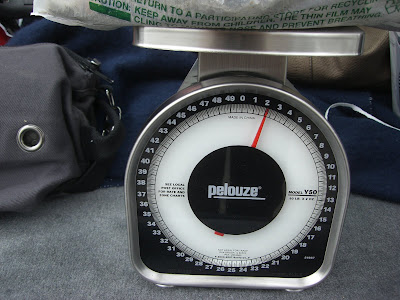 Ahhhh, my new shipping scale from Staples. It works rather well. Today was the first time I had a chance to use it since we bought it on Sat.. 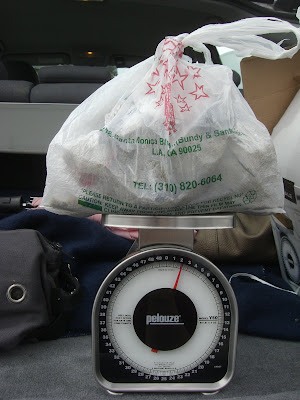 And I weigh the trash in the back of my car before I deposit it in a row of trash cans that is not on the beach, but next to the parking lot. I do this because more than once I have seen the trash being carefully collected from their by Santa Monica City employees.
There you have it. My routine, in case you were curious.
Today I didn't collect as much because I got talking to a mother and daughter who just drove cross country to move the daughter into Santa Monica so she can start her new job as a vet in West Los Angeles. The mother had called out to me, "You're a good person for doing that."
So I stopped to chat, say thanks, and tell them about my project.
It was a great conversation where we briefly brainstormed the need to raise people's awareness about trash, and how to dispose of it properly. They had saved their diet coke cans for the entire trip to recycle in California. They had tried in Kansas, I think the mother said, and the people they had asked about recycling had looked at them like, "What's that!"
She suggested that we get someone like Michelle Obama to remind people about not littering, anywhere, but I'd like the beach to be emphasized. Although, trash washes down the storm drains from all over LA when it rains. But I'll save that discussion for another time.
Briefly, about the "good person" comment. Thank you. When people say encouraging things to me when I am out there collecting on the beach, it feels good. But, a huge part of why I am doing this is so that I am not depressed. It is a selfish act to feel like at least two less band-aids didn't go back into the water from that beach today because of me. And while that may not sound significant, I feel better every time I do this. Because I am naturally overwhelmed and full of fear when I think about all of the environmental problems we are now facing. And while a bag of trash is not solving global warming, and I am not President Obama, I feel better doing something, rather than nothing. I do this for the planet, and all of us, but I really do this for my own peace of mind too.
Posted by Sara Bayles at 7:49 PM No comments: Links to this post