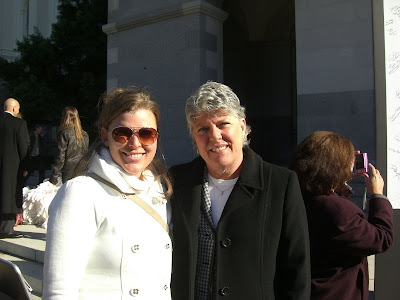 I got a chance to shake hands with Assemblywoman Julia Brownley who is the principle author of AB 1998 - CA statewide ban on single use plastic bags. I may have mentioned - oh just a few times - that she is from Santa Monica! 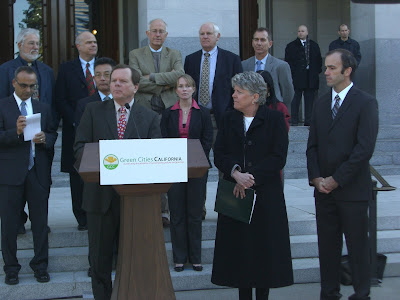 Terry Taminen of Seventh Generation Advisors introduced all the speakers at the press conference. His wife Leslie Taminen is a power house strategist, and super star who works tirelessly for legislation like AB 1998 that supports ocean health. 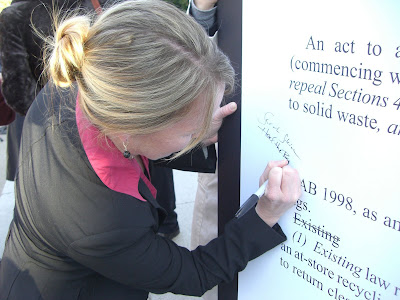 Sara Sikich of Heal the Bay gets to sign her name to the reprinted version of the bill. There were a lot of names on that board. I am sure that if felt good to add hers since Heal the Bay is the primary sponsor of the bill.
Thank you Heal the Bay for all of your hard work, and to Kirsten James of Heal the Bay who has lobbied for AB 1998 in Sacramento more times than she can remember, but could not come up that day. 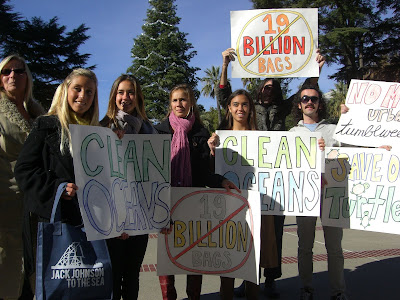 The four star students from the South Orange County Surfrider Chapter who are leaders in their own high schools as part of the Surfrider Clubs that have sprung up in the last year are seen above joining forces with Environment California canvassers who came up in support of AB 1998.
A big thank you to Denise Erkeneff for mentoring the 9 high schools, and one middle school into adopting Surfrider Clubs at their schools deep in the O.C.. 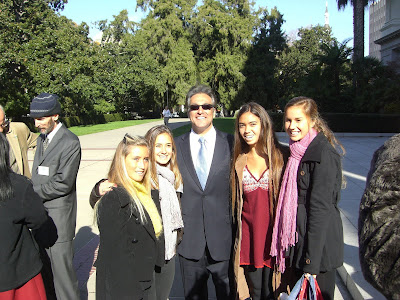 The students with Supervisor Ross Mirkarimi from the city of San Francisco who was:
First-in-the-Nation to write a ban on plastic bags in chain grocery stores and drug stores, which sparked similar legislation around the world from Oakland to Canada to Paris to Beijing. Andy Keller - creator and owner of Chico Bags who gave a great speech about the benefits to CA's economy by fostering more green jobs. You can watch his speech in this post. 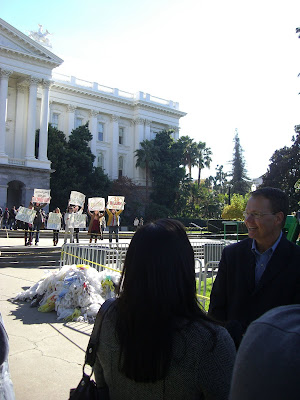 Ahhh - this next photograph is of a major lobbyist for the ACC who had so many of his facts wrong that it would take me all day to list them, but here are some of the highlights from his interview. Notice that he had some people in the background that were trying to get his attention.
HE SAID: "Bill would have succeeded in putting people out of work in CA."
HE LEFT OUT: That the largest bag manufacturer of single use bags is in South Carolina.
HE SAID: AB 1998 would "Raise grocery costs for families"
HE LEFT OUT: That if you remember your bag you don’t have to buy a paper bag for 5 cents. And the price of the already available paper and plastic "free" bags are already in your grocery bill right now. SO using a reusable bag saves you money.
HE SAID: "There’s a better way to deal with it (plastic bags) and that is through enhanced recycling and public education."
HE LEFT OUT: For years they have been “improving” recycling efforts and are up to less than 5%. That is only 950 million out of the 19 billion bags that CA uses in only one year! That leaves 18.05 billion bags in our oceans, rivers, landfills and streets…
HE SAID: "These bags are fully recyclable and people reuse them in their homes so to suggest that people use them once and dispose of them is factually incorrect."
HE LEFT OUT: Um..what about the CADMIUM in the red lettering on the bags that ends up in peoples homes that is a known carcinogen? 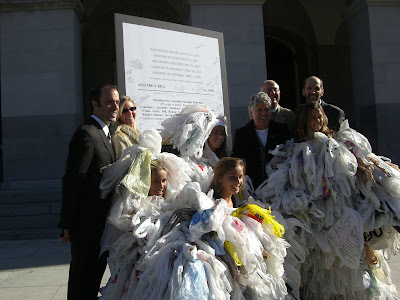 And one final message to State Senator Mimi Walters from the students in her district:
(Who also took $3,600 in donations from the ACC and voted against AB 1998)
"I feel like our senator Mimi Walters does not represent us. She does not represent what the future needs, just what the ACC wants. If she were here today I would ask her to please re-look at her wants and what other people have influenced her to do like the ACC and really look at what the people need and what the people want."
Senator Walters might want to rethink the price of listening to her constituents.
Posted by Sara Bayles at 5:04 PM No comments: Links to this post


The four students in the video above cared enough to spend their Thanksgiving weekend in the state capitol to let their elected officals know that they want to see the kind of change that would occur if we pass AB 1998. Here is what they had to say. I was very impressed.

Have you seen a bag monster before? Well, check it out. They are pretty scary! Not the girls, the bag monsters. Although these students are a force to be reckoned with in their own communities. I look forward to seeing how their movement to band together grows.
Posted by Sara Bayles at 4:31 PM No comments: Links to this post

Here are some of the stand out points that the Governor made during his speech at the press conference I was at last Monday:
"We (CA) is very proud that we are always trying to TERMINATE (oh yes, really) the dirty pollution that we have been talking about today."
Facts he mentioned that I was glad to hear him include:
CA uses 120,000 tons of plastic bags a year.
(I know that a plastic bag weighs only .25 OUNCES because I weighed one recently.)
Only about 5% gets recycled
(That means 950 million bags, leaving out of the 18.05 BILLION that we use. And most of the "recycled" bags are shipped overseas to Asia where they are burned in open air facilities to melt the plastic...more on this later)
It is estimates that 80% of all Marine Debris is plastic
(let's call it what it is shall we - Marine LITER, or Marine POLLUTION, or something else that doesn't make it sound natural. Debris could be sticks and leaves. Plastic is toxic.)

Julia Brownley is from Santa Monica (Where I live! A little Santa Monica pride over here...)
Her speech was great! You should take a minute to watch it.
She congratulated LA County for banning the bag and said that if, "LA County were a state, it would be the 8th largest one." Feeling good about the progress that we just made.
She also mentioned that she was in Paris recently and there were no plastic bags there. The list of other countries that have already implemented a bag ban, or tax is long and diverse.
But the majority of what I filmed where student voices. Next post with what they had to say coming right up!
Posted by Sara Bayles at 4:15 PM 2 comments: Links to this post