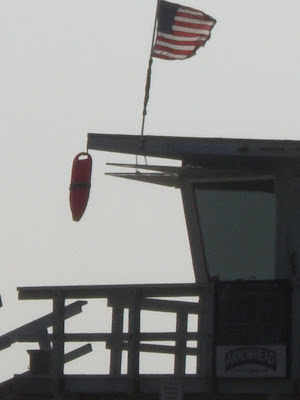 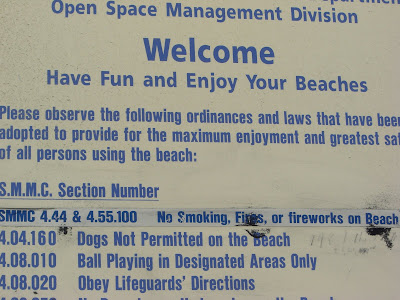 I interviewed a Santa Monica  Area South Lifeguard Capt., Brent Katzer
He is very familiar with Life Guard Station 26.
My thanks to him for taking a few minutes out of his day to answer some questions.
Our interview is what follows:
1. What kind of trash to you see most often on this part of the beach?
"Plastics, cigarette butts, styrafoam...anything that floats and can be brought in when the currents and winds shift....especially after it rains."
You are advised in LA, not to go into the water after it rains for 2 - 3 days because the toxins and trash that wash in, mostly from storm drains. We need a new drainage system, and awareness not to dump trash even inland in the city.
- I took the picture of the Beach Ordinances because, if you didn't know, you can't smoke on the beach. But, one of the answers Brent gave was cigarette butts. I wonder what the solution is. A lot of  the cig. butts wash in, but some wash out. I stopped a policeman riding a A.T.V. today to ask him what the fine was for smoking on the beach. He didn't know, and said that it is mostly tourists who need to be told to put out their cigarette. How many get left in that sand that way? I would bet most. 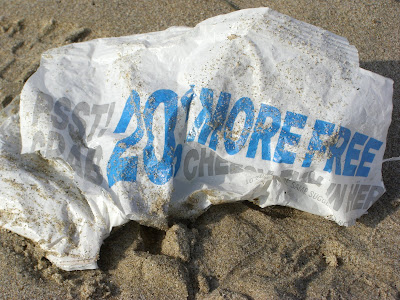 2. What is the worst example of trash you have seen on the beach?
"Life Guard Station 26 is an interesting place...there is a lot of illicit night activity there...you see a higher number of cigarette butts, and prophylactics....hygienic trash." 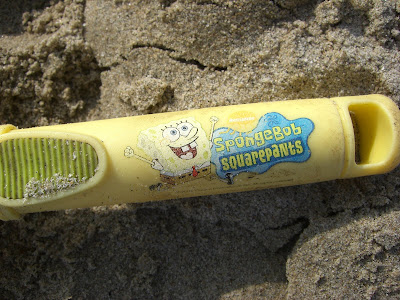 3. What is something that you have seen at the beach that inspires you?
"When organizations like Heal the Bay have beach cleanups....when kids come out and participate....when other patrons pick up trash on their own."
Another organization that hosts local beach cleanups is Surfrider. They also have monthly chapter meetings in Venice Beach, or elsewhere in CA, and in many other states. Check them out. You do NOT have to be a surfer to join. I'm not, and I have been a member for a long time. 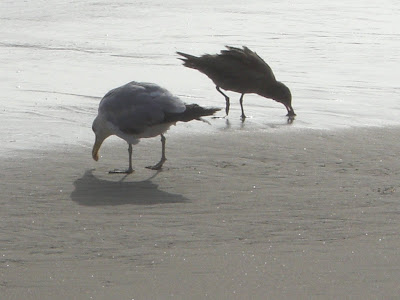 Garen, my husband who is a Marine Biologist, says that these seagulls were searching for small crustaceans (crab-like-critters) and worms in the sand.
I looked these gulls up on a site my friend sent me recently. Inspired by a biologist named E.O. Wilson, it is called -
The Encyclopedia of Life
I guessed that what I saw was a mature California Gull, and a juvenile California Gull because before they turn 3 - 4 yrs. they have a brown mottled feather look. 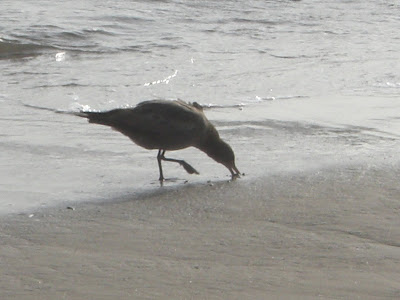 Talking about E.O. Wilson brings to mind one of my favorite sites
TED - ideas worth sharing
Wilson on Saving Life on Earth
Above is the link to Wilson's talk. But at this site you can find many fascinating people who have been given 15 - 20 min. to give a talk about what they do. Scientists, politicians, authors, Bono (only if you want to watch him, do you have to:)). I strongly recommend that you check it out.
Posted by Sara Bayles at 9:13 PM 1 comment: Links to this post