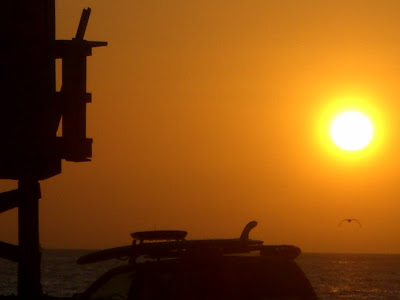 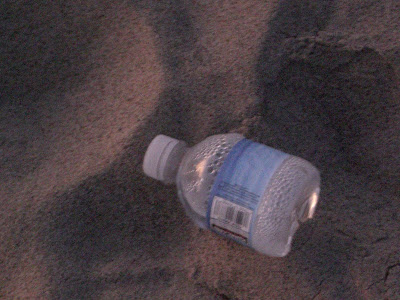 The water bottle for Day 54. I was talking to someone in the parking lot tonight who asked me what I was weighing. I explained, trash, and we got to talking. He is a surfer from Nepal who moved here 14 years ago. He was telling me that he grew up without a lot of material things because he is from a poor country. Therefor there was hardly any waste. For example, to get another soda you took your glass bottle in to be refilled. Two great ideas, glass bottles, and refilling them. But they weren't trying to be green, this is conservation out of necessity. I have a feeling I am collecting trash that stems from privilege. 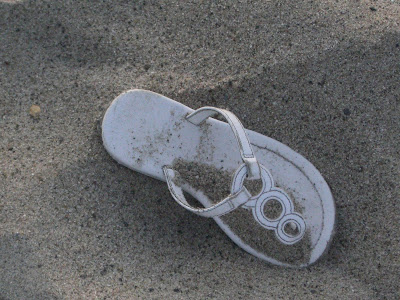 I thought it was a shame that someone left this tiny, stylish shoe. I should have put my foot next to it for purposes of scale. Well let me just tell you, it's for a two year old. Which brings up something I think about a lot.
Why do people leave trash or their belongings behind on the beach?
I have four reasons and one X factor.
1. People are lazy. They think someone else will do it for them.
2. People really do not think about it. For whatever reason, environmental education has not reached, or made an impact on them. They are lacking in awareness to the point that it rarely, if ever, occurs to them that there is a connection between their daily choices and the rest of the world.
3. People have reached a state I refer to as beach bliss. Beach Bliss is the sense that you are in another world on the beach, one that makes you happy and forgetful. Therefor you act in ways here you wouldn't in your own life because you are essentially having such a great time at the beach. Example, they're probably not leaving empty bottles all over their front lawn as they come into the house from work, but they're not in that mindset here. So as they float away at the end of the day, they forget to act responsibly. A stretch at best, but more optimistic.
4. Beach Fatigue. Similar to the reason above, except you have stayed too long and the sun and waves have zapped you energy until it is all you can do to make it back to your car with most of your stuff. my friend Brigid came up with this after hearing my Beach Bliss theory.
X factor - sea gulls. They tear things away from blankets while their unsuspecting owners are away in the water, or dive for "snacks" in the open trash cans.
Open trash cans--something to tackle in a future post. Hint, open trash cans and open storm drains have something in common.
Rubin, the Lifeguard at station 26 tonight, (who is also responsible for coming up with the above X factor) believes that it is mostly reason 1 & 2. And the grossest thing, in his opinion, is when he sees dirty diapers on the beach. Yuck. 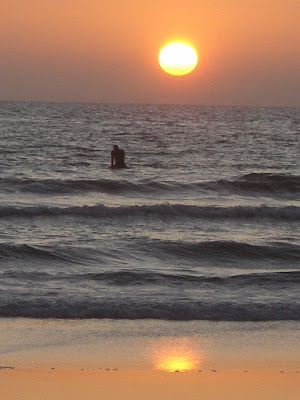 Many people talked to me today on the beach. Rubin offered me gloves, a few others said thank you. Which reminds me, Siel of Green LA Girl and I are doing a joint beach cleanup on Oct. 25th. Come join us! There will be drinks, snacks, like minded folks, bloggers and readers and ocean lovers. We're joining forces for a night, come along.
SO MARK YOUR CALENDARS AND SAVE THE DATE OCT. 25TH BEACH CLEANUP WITH ME AND SIEL! WOO-HOO!
Posted by Sara Bayles at 9:56 PM No comments: Links to this post