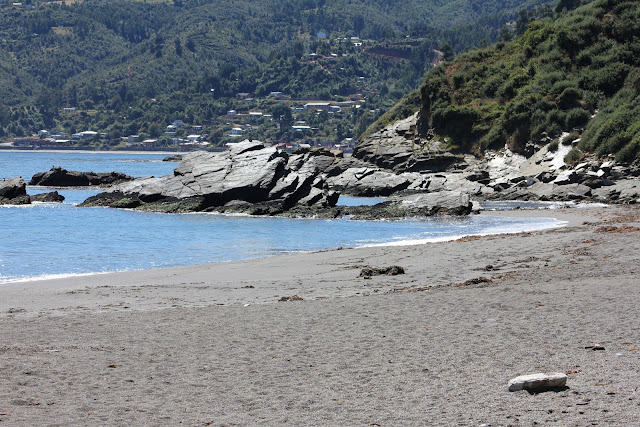 Niebla, Chile - 20 min. ride from Valdivia
We have been staying in a small city that is a bit up river from the coast. This is the first beach in Chile that Garen and I have seen. As soon as I saw the water, I felt how much I had missed seeing the ocean for the last week. 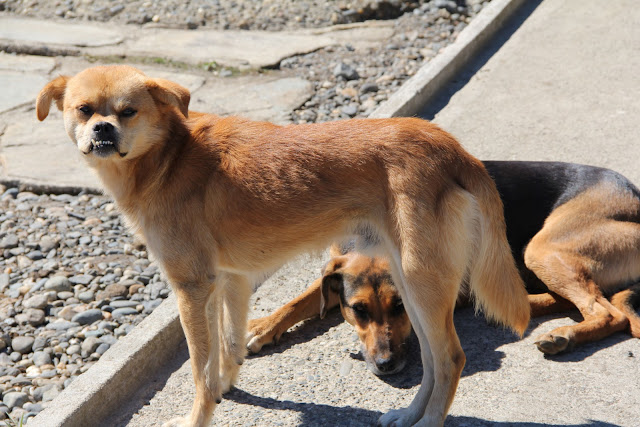 A word about the street dogs that we have met in Niebla and Valdivia.
These dogs are skinny.
Sometimes so skinny that you want to look away.
These dogs have a healthy fear of people but have not shown any sign of aggression toward us.
These dogs have manners when you give them leftovers, and treats.
Some of these dogs will not eat a "dog" biscuit.
We think it may be because they have never had one.
These dogs need help.
I would love to connect with a local vet that could perform spaying and neuturing for a small fee, or for free. I'm working on it. The means don't exist for people to take all of these dogs in. I respect that. But if there are less of them, there will be less competition for food scrounging. This will alleviate the suffering of some of the smartest, kindest dogs I have ever met. 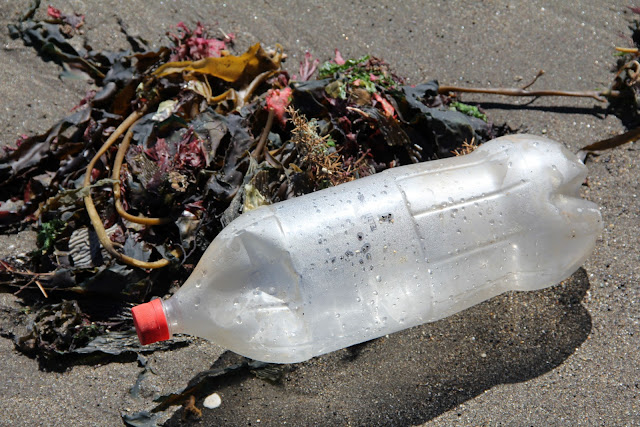 We walked down the beach after meeting the dogs and quickly came upon many items made from "disposable" plastic. I read an email today when we got back to the hostel from a man working on sea turtles in central america. He wrote that the most common item found on the beaches where he's been working is the plastic bottle. 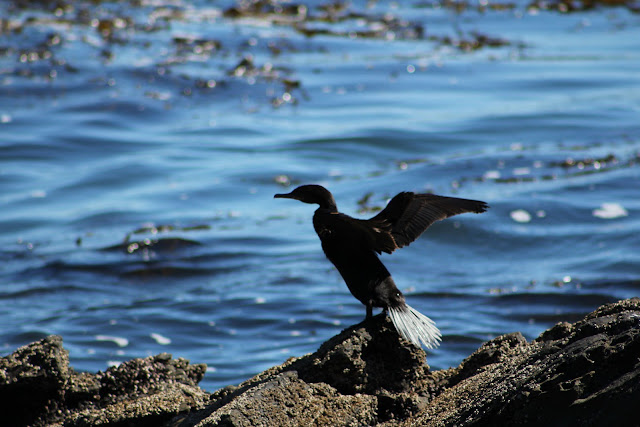 A cormorant drying its wings. 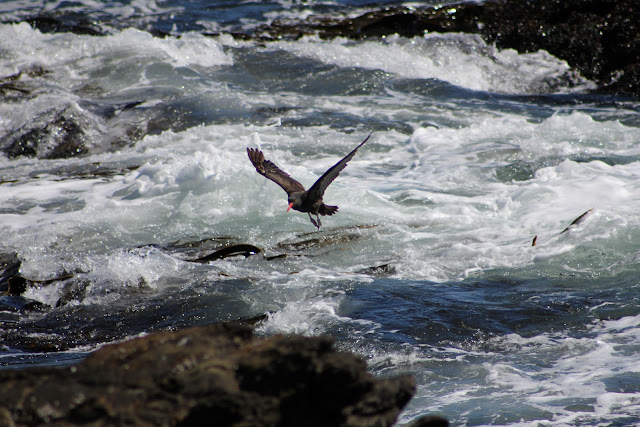 An oyster catcher flying to a new rock. 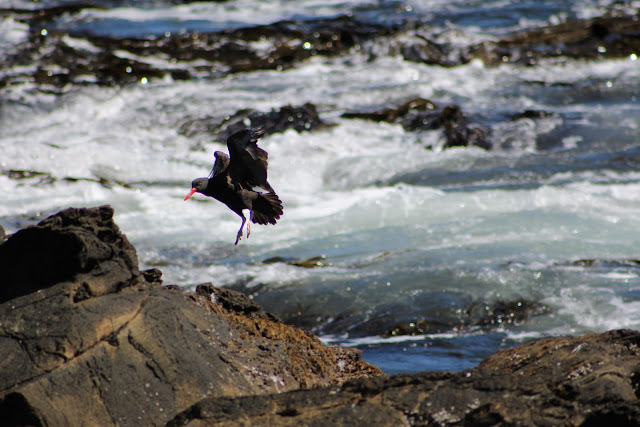 Garen and I spent 20 minutes watching the birds, waves and kelp swaying under the water. 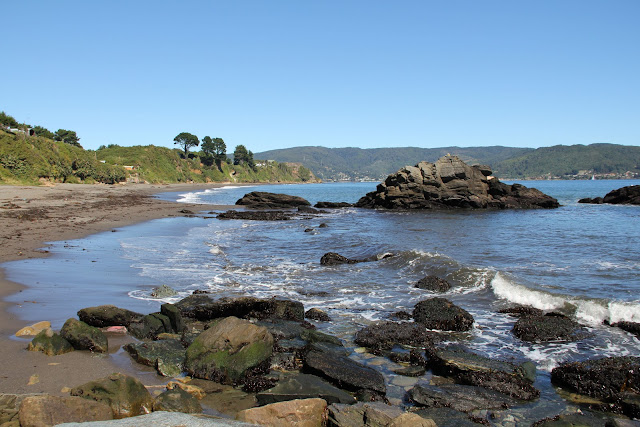 The tide was coming up. We decided to climb down from the rocks and do a beach cleanup. 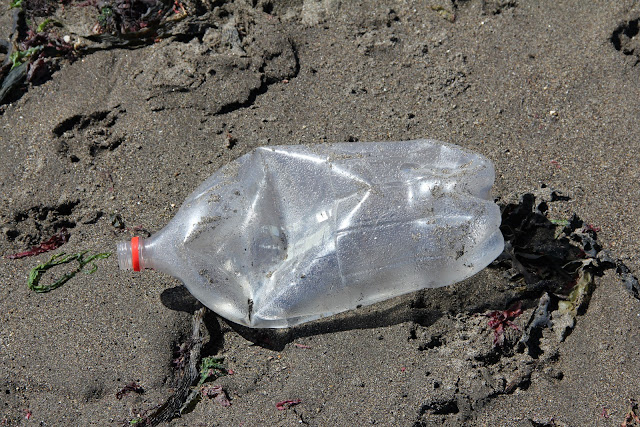 Look what we found on our way back. 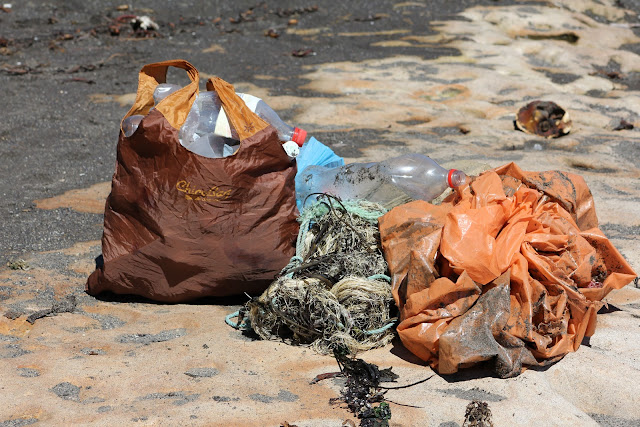 Our collection from 20 minutes of cleaning the beach. I am glad that I had a Chico Bag in my backpack. The founder, Andy Keller is facing a lawsuit from two out of state (Chico Bags base of operations is in Chico, CA) plastics companies. I will be covering this in some detail as it unfolds. This is a real David vs. Goliath fight. They are trying to shut Andy up, put him out of business, and scare the social movement that has sprung up around banning plastic bags.
Guess what?
We are unstoppable. Andy has got a hell of a lot of people behind him. I'll let you know how you can help as more information becomes available. 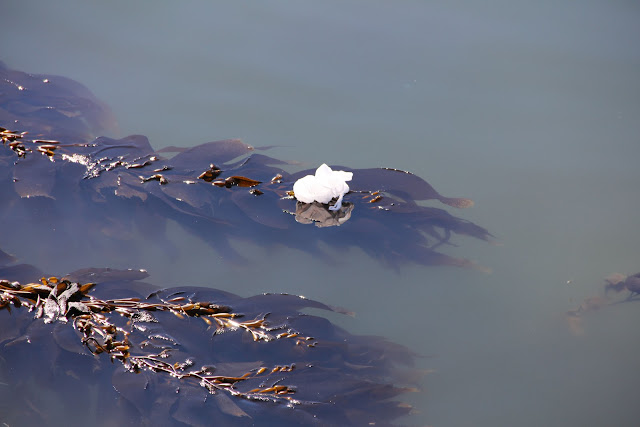 Later in the day, we took a ferry to the island of Corral. Garen pointed out the kelp over the side of the pier as we walked to town. Corral is a unique place that has a long embattled history with its Spanish conquerors. Now the island finds itself embattled with disposable plastics, just like everywhere else. 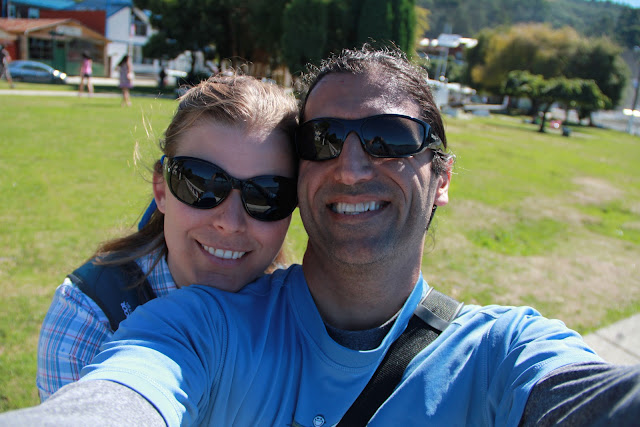 The Sea Dragon docked in Valdivia today. I'm glad Garen and I got out of town to explore because we may be busy for the next few days!
Posted by Sara Bayles at 4:20 PM 10 comments: