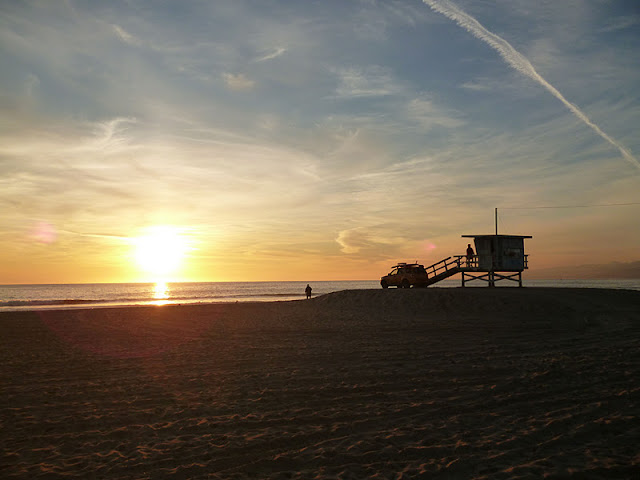 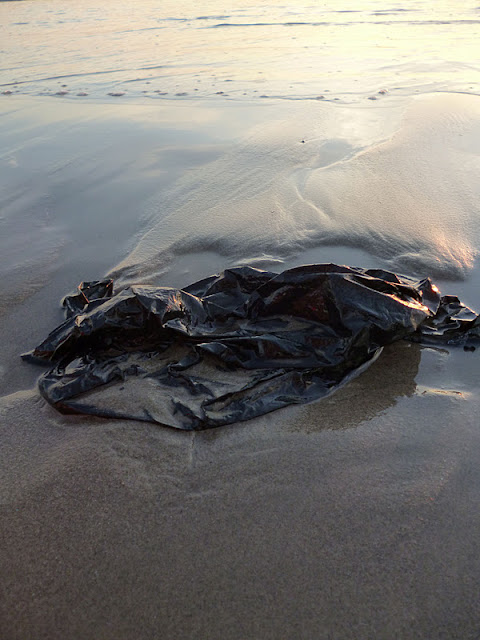 I felt relieved for sitting out this morning from my usual body surfing routine when I weighed my bag, discovering that I collected 11.9 pounds of plastic garbage off the beach tonight. The tide brought in the contents of the storm drain for me to see. This is only one of many intact plastic bags found on the sand. 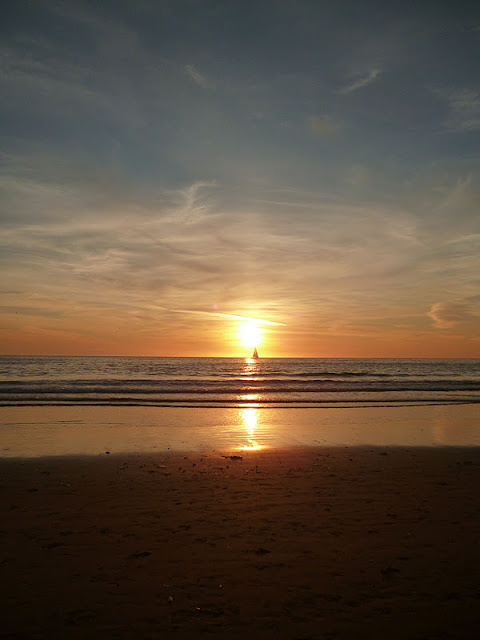 The stunning sunset created a sharp contrast to the garbage strewn across the beach. The funny, or not-so-funny, thing is that when I found the condom last night with Kitt and Anna, Kitt said the worst item he could think of finding would be a used diaper. DA-DAAAA! 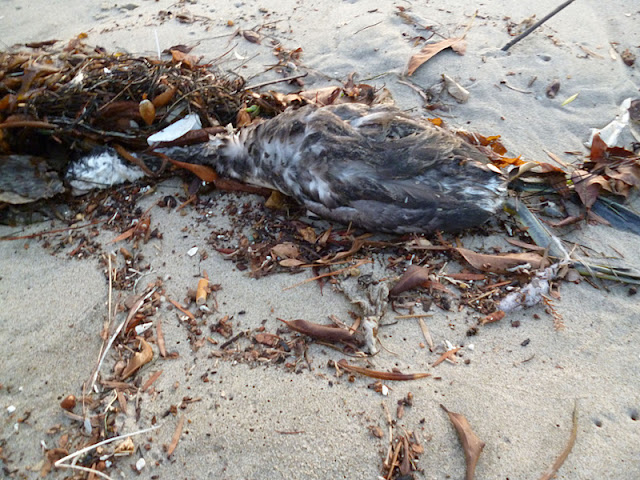 A woman stopped to talk to me and say thanks for collecting trash after the rain. She commented on how much there was on a night like this. I agreed. She asked me how I don't get discouraged? My only answer was that doing something about it felt a whole lot better than not.
Christy also mentioned a bunch of pictures of local dead birds she's seen walking on the beach between Rose Ave. in Venice and the pier. She wants to put them online somehow because recently she's found a few with fishing hooks in their beaks.
I walked past this Greeb bird on the way back to the car. I normally wouldn't snap a picture of a dead bird, but when I saw this Greeb, and in the light of my recent conversation with Christy, I realized that I've seen a hawk, a sea gull, and 3 Greebs in the last month an a half washed up on my little stretch of sand between 26 and 28. All of them look like they died of natural causes.
But did they? Or did they ingest a bunch of single-use plastic garbage that's been floating around?
Who can tell, except in made me pause... 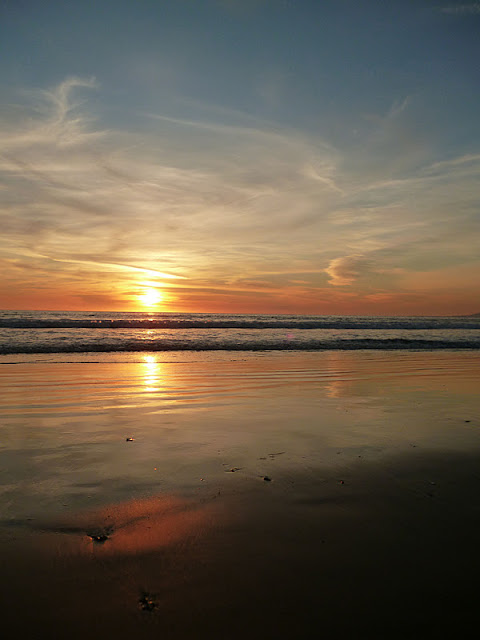 Posted by Sara Bayles at 8:46 PM No comments: Links to this post 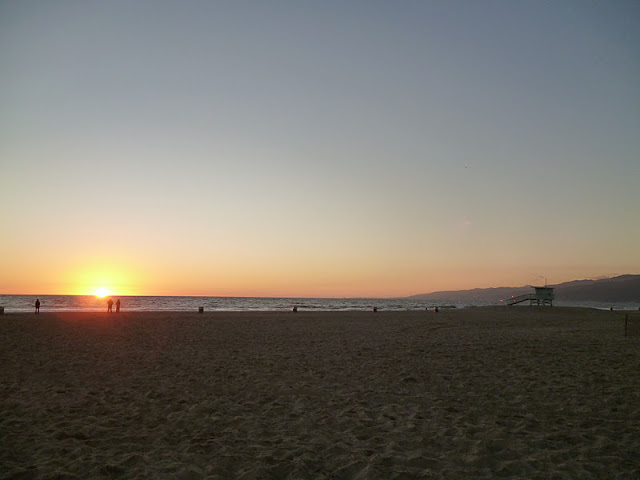 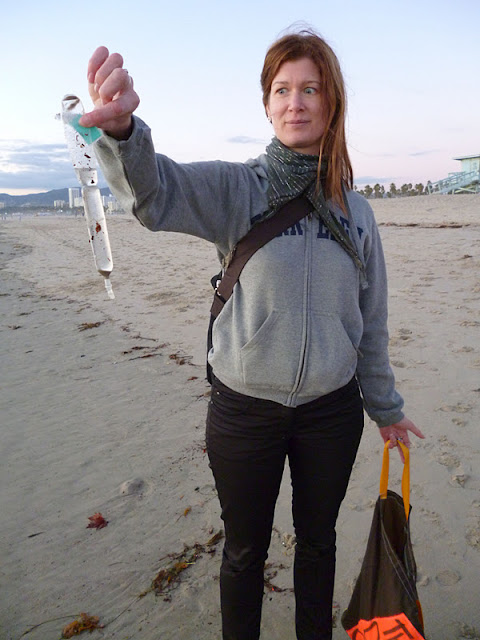 We've seen a few folks from the Sea Dragon Crew lately. Last March Garen and I joined a rag-tag group of environmentalists, journalists, activists, documentary film makers, and scientists conducting research and documenting our findings while crossing in a 72 foot sailboat from Chile to Easter Island and then to Tahiti.
Anna was on another crew but is colleagues with someone who was on board with us. She stayed with us overnight, and came out for a beach cleanup. She has been on a road trip for work from Sweden with our other good friend Anna. This Anna studies toxins in marine mammals. She also assesses legislation and it's effectiveness in regulating these P.O.P.s, or Persistent Organic Pollutants. It was so much fun to have her with us. This woman can discern reams of data, but the plastic sleeve for children's frozen popsicles like the one above, left her puzzled. 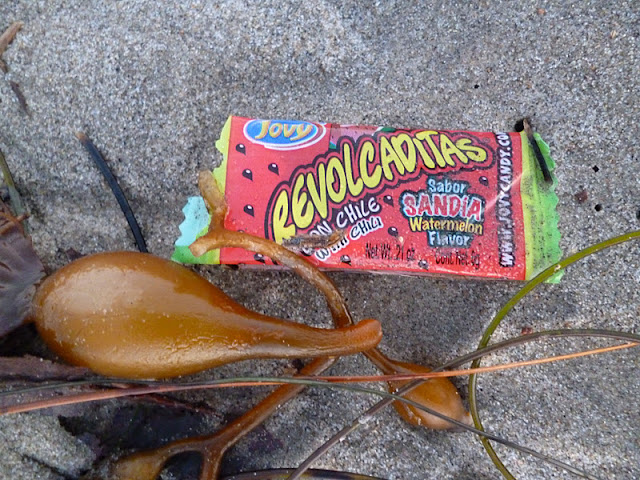 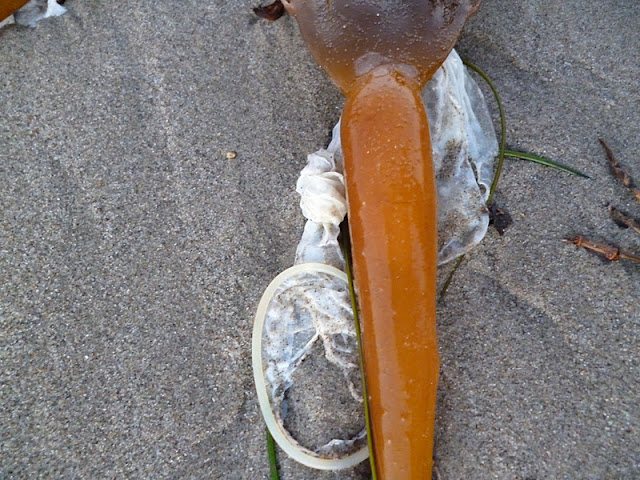 Both nights that Kitt has come out with me we've found one of the above objects. Good grief. 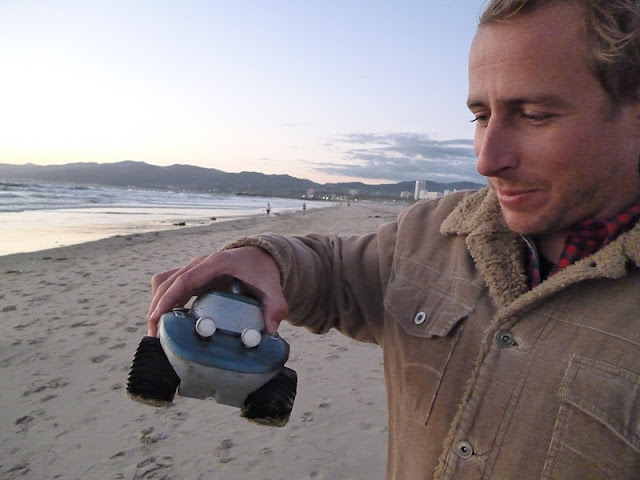 This space invader plastic car, or at least that's my interpretation, was one of the last items taken off the sand. Thanks again to Kitt and Anna for joining me during a sunset trash pick.

Posted by Sara Bayles at 8:26 PM No comments: Links to this post