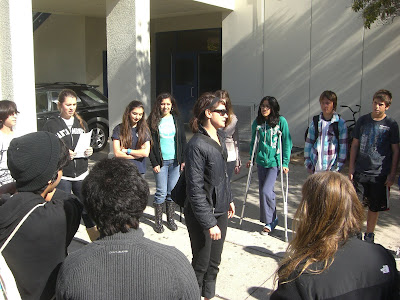 My friend and fellow Surfrider volunteer Lindsey Jurca participates in our "Ice Breaker" game to start off the day.
The Teach and Test club at Santa Monica High School, which is sponsored by Heal the Bay and Surfrider, invited four local middle schools to come join them last Saturday to test the ocean water quality here in Santa Monica. A little background first:

Last year, the Surfrider Foundation, in partnership with Santa Monica High School, launched the Teach and Test Ocean Water Quality Monitoring Program to engage students in hands-on research and empower them to affect positive change in their community. Through funding from the Surfrider Foundation, California Coastal Commission Whale Tail Program, Metropolitan Water District of Southern California, the Jane Goodall Institute Roots & Shoots Program, Santa Monica Co-Opportunity, the Santa Monica Daily Press, and Bike Attack, the Marine Biology storeroom was converted into the “Samohi-Surfrider Marine Laboratory,” fully equipped with scientific apparatus to test bacterial levels in the ocean. On Wednesdays before school, Samohi students sample water at several local sites within the Santa Monica Bay. They then process and analyze the samples themselves in the lab, and share their findings with the local and international communities via newspapers and online networks, including the Surfrider Foundation and the Jane Goodall Institute Roots & Shoots Program." 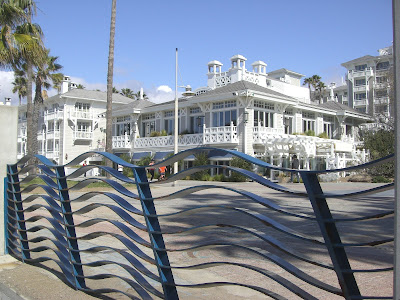 We walked from the school to the end of the Pico-Kenter Storm Drain. All drains lead to the ocean, and this one funnels right past one of the shwanki-est hotels in Southern California, Shutters.
So how much do people spend to stay next to water run-off laden with bacteria, trash and other diseases, (no exaggeration unfortunately), can you guess?
the average - $515.00 USD/night
for a 1 bedroom Ocean View Suite - $1,756.00 USD/night
ummm.....without tax. really? 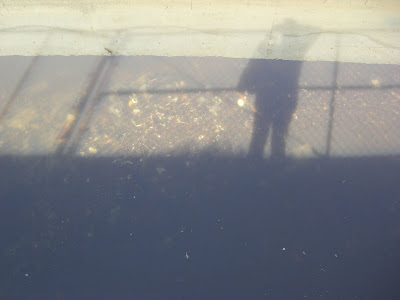 Here's a view of the storm drain. It's bad, but just wait. 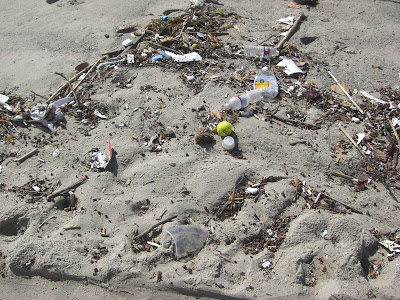 It rained the night before so all of the contents that had built up in the storm drains since the last rain spilled into the ocean without any filters, leaving some of it to flood back up onto the beach. 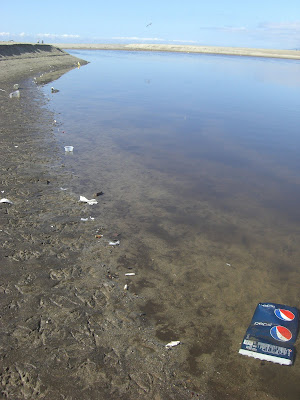 This is a shot if the pool of storm water run-off that collects between the beach and Shutters Hotel. Many sea birds were bathing in it this morning. 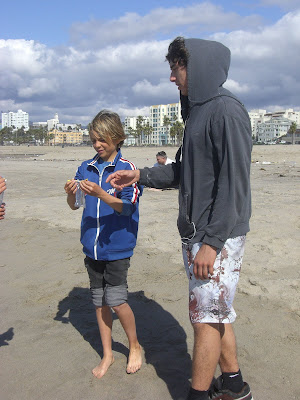 Raf, from SAMO high showing a middle school student from SMASH how to tie off a water sample. 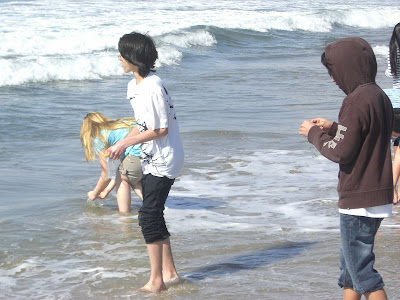 Standing in ankle deep water, you dip the sterile bag into the surf, trying not to collect sand which is loaded with bacteria. 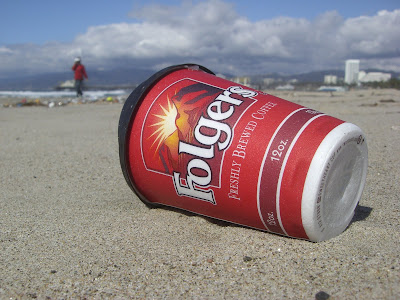 The trash I noticed had a few stand out characteristics in common.
1. they were made from plastic, or styrofoam (which is also plastic)
2. they we branded with major commercial company logos
3. styrofoam was in abundance today even though the city of Santa Monica has banned "Non-recyclable Plastics" "because they make up the 2nd largest amount of waste in the Santa Monica Bay and on our beaches." - Office of Sustainability and the Environment Santa Monica 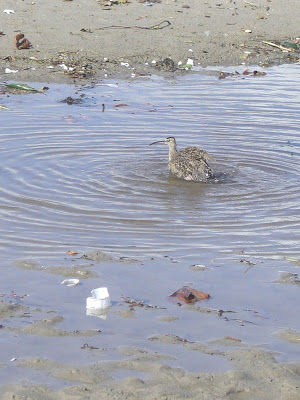 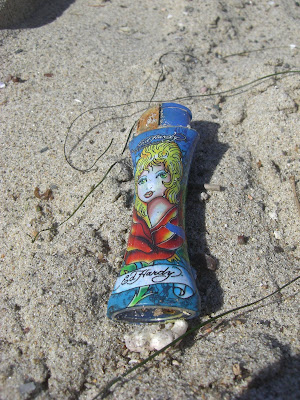 EXTENDED PRODUCER RESPONSIBILITY - is a term that means:
"Extended producer responsibility" (EPR) means that the responsibility of producers for their products is extended to the post-consumer stage. In other words, under EPR, a company must be concerned not only with making the product and how it functions, but also with what will become of the product at the end of its useful life. In the case of consumer goods, this principle shifts responsibility for recycling and waste disposal from local government to private industry, thereby internalizing the costs of waste management into product prices. Under such a scheme, citizens pay for waste management as consumers, when purchasing products, rather than as taxpayers, through local taxes. EPR programs typically are aimed at increasing recycling and often contain mandated recycling targets." 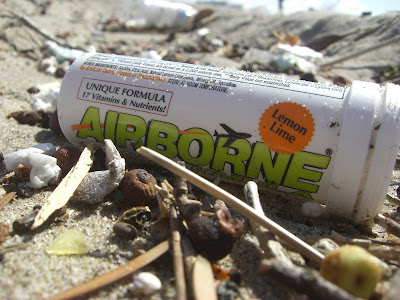 I cringed realizing that I have the same container in my purse as I took this picture. Here's the thing. Plastic packaging is damn hard to get around. I reuse my Airborne container to carry my vitamins and supplements with me if I am eating out. 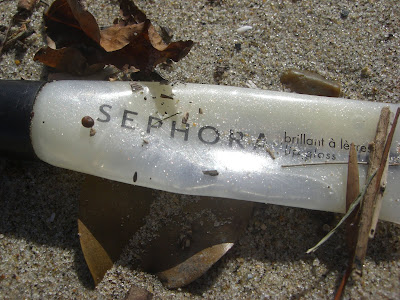 I'm sure that I have one of these in my purse too. Different brand, same convenience item. 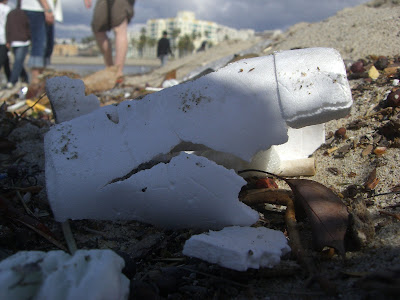 "While EPR is intended to reduce the amount of materials going to landfills, it is also aimed "upstream"-- at product design and material selection. Its underlying theory is that if producers must pay for waste, they will have an incentive to make products that are less wasteful. EPR provides the missing link between product design and recycling: a link that is key for making recycling efficient and economic. The movement toward designing for disassembly, developing reverse logistical systems, and demanufacturing are strategies industry has used in response to the new incentives posed by EPR."
- by Bette Fishbein, Senior Fellow, Sustainable Products and Practices, INFORM Inc.
An idea worth fighting to implement even if the US is way behind other countries in the development of legislation that supports this. 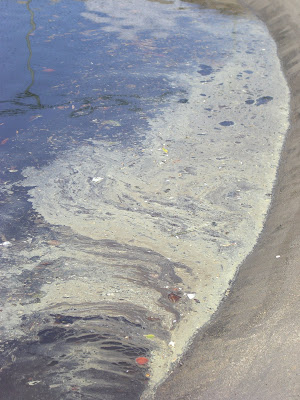 Before my group was done with the beach part of our day, I had to leave to go get the pizzas that were so graciously donated by Pizza Fusion. This was my parting view before lunch. The day was a success. We passed on knowledge to people who will one day be left to address the mess we've made of our oceans. I say it was a success, but it was also a hard day for me personally to be out there on a beach that was literally covered in trash.
Success could also be in the courageous stance people take to cover distressing environmental problems. The blog post I have linked to below features a beach so polluted that I feel like I need to disclose the link with a movie rating. Maybe I've only made it more enticing.....here it is.
Posted by Sara Bayles at 2:23 PM No comments: Links to this post 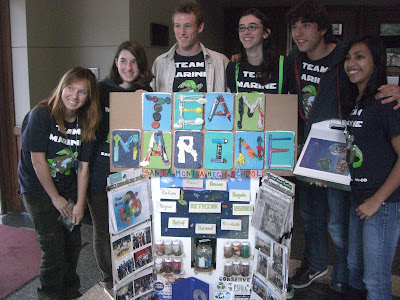 This amazing group of eco-warriors pictured above is Team Marine.
I have the honor of being their "Volunteer Mentor." Really what that means is that I get to hang out with cool people who inspire me every damn time I see them. Like last Friday when we braved the 10 East freeway into downtown to make our way to USC by 5:00 to turn in their "QUICK SCIENCE CHALLENGE" project.
(A special thanks to their Assistant Coach Renee Klein who couldn't be there to join in the festivities, but met us for the BEST Thai food I've ever had afterwards thanks to Ben.) 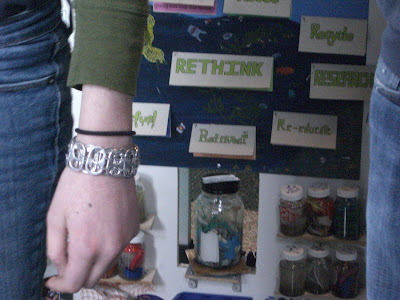 They walk their talk, check out the bracelet.
The Quick Science Challenge is held by the USC Wrigley Institute on Catalina Island and sponsored by Quicksilver. Starting their work for this project back in the summer, it is hard to calculate just how many hours were put into their efforts. 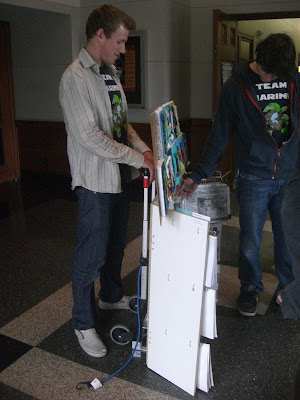 We needed a dolly to get their project board delivered safely.
One aspect of their project that I like very much is their 10R concept. Most of us know the "green mantra"- Reduce, Reuse, Recycle.
Well they take those 3 and raise it 7.
Here's a link to their blog and website so you can read the list. Before you click over, (and then click back right :)), can you think of 10R's? 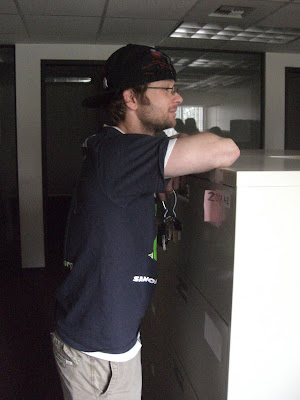 This is Ben Kay their teacher, coach and mentor. He probably works just as much, if not more, outside the classroom time he is paid for by SMMUSD. Why? Because he's a passionate guy who wants to save the world. It's just that simple. His efforts are inspiring. 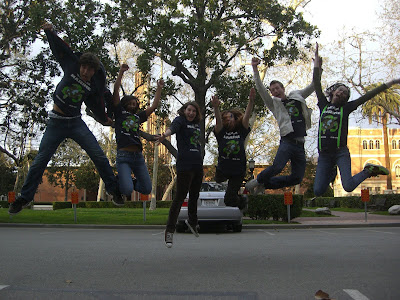 After late nights, long weekends, and countless hours outside school, Team Marine couldn't contain themselves and I don't blame them. Congratulations you guys. I see a week in Catalina in your future.
Posted by Sara Bayles at 2:01 PM 2 comments: Links to this post 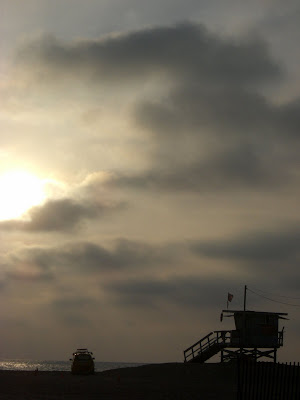 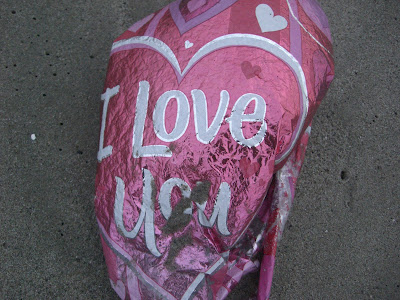 I love the beach - surprise! Waiting for a fellow Santa Monican that I met thru Twitter to join me, I tried to sit quietly by the water, just to soak in the views. I couldn't. Why? Riding in on the waves where a bunch of balloons from Valentines Day. Try as I might to ignore them, I reassured myself that in ten minutes I would be picking them up. "Just chill out," I told myself.

Not being able to enter a state of relaxation I scurried to the water's edge to collect the many "I Love You" balloons floating to shore. This experience may reveal my neurotic nature. It tells you why I started the Daily Ocean that's for sure. But it also leaves me with a question. Why can people walk by so much trash on the beach and relax? 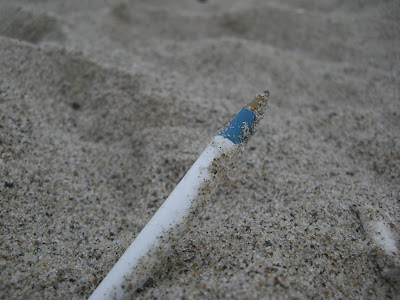 Surfrider answers the question that I posed above in their video, "Shifting Baselines." 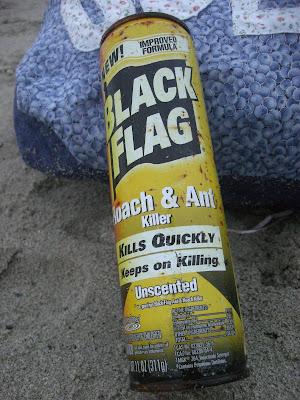 This is NOT the first can in insecticide that I have found on the beach. Although the last one I took off of the sand was in Tulum, Mexico after a hurricane a few years ago. The bottle was in Chinese with a picture of a beautiful (I'm assuming) Chinese woman with the only lettering in English reading, "insecticide." 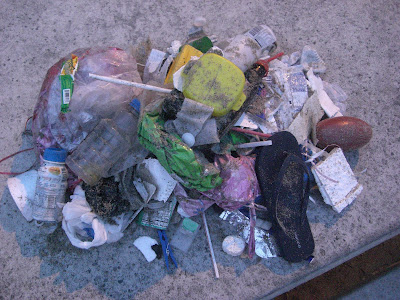 What does 4.3 pounds look like? It looks like that. Although a beach cleanup held by "Save Our Shores," in Santa Cruz reports:
"On Saturday February 13th, over 30 volunteers came to support Save Our Shores' river cleanup efforts. SOS hosted a cleanup on Branciforte Creek where volunteers collected over 1,000 pounds of trash and over 400 pounds of recycling! Volunteers removed everything from couches, chairs, a bed frame, vacuums, tarps, shopping carts, electrical wires, batteries, car parts, cans, bottles, and lots of plastic items. Thank you to those who showed their support for our local watershed and made this creek cleanup such a huge success!"
I won't argue the success of taking out that much garbage, but doesn't it strike you as alarming that there was that much there to collect? What can we do to stop the "Shifting Baseline" of beach/river cleanups?
Posted by Sara Bayles at 11:02 AM No comments: Links to this post