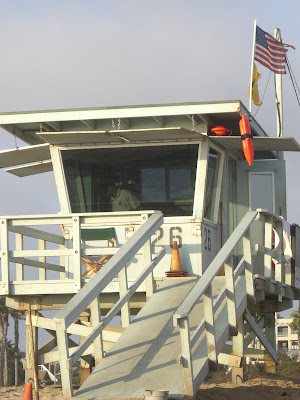 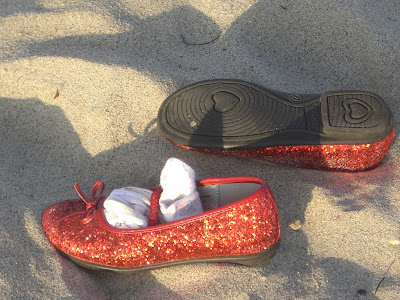 Ruby Slippers! There's no place like home. Garen and I spent over an hour in the water today at the beach in front of Tower 26. I had never swam there before, but we checked the Heal the Bay Beach Report card and saw that it was an A even though it is near beaches that have received an F rating.
And besides, I have collected some trash off that beach that I would rather not swim with. I couldn't resist the perfect body surfing waves that roll in there any longer, and it made more sense to me why surfers will risk dirty beaches if there is a nice wave there. Now I also understand why so many people go there.
The water in the bay is warm, especially in September here in Southern California. And the sandy bottom, where perfect surfing and body surfing waves roll in, makes it a really great place to play in the water. After having such a good time there today, I am even more determined to carry on with this project. 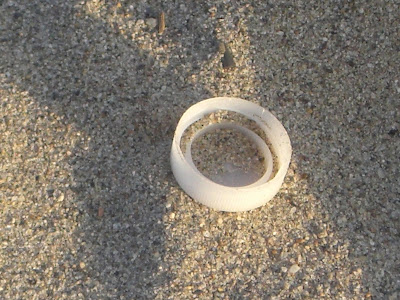 There was a festival on the pier today sponsored by the Roots and Shoots Foundation that was started by Jane Goodall. The students of Team Marine at SAMOHI (Santa Monica High School) brought their RETHINK sign to prop up in front of the stage. Their sign, which I have mentioned in this blog in an earlier post, is made from 37, 427 plastic bottle tops, that is 37,427 plastic bottle tops that have not made it in the ocean. Neither did this one. 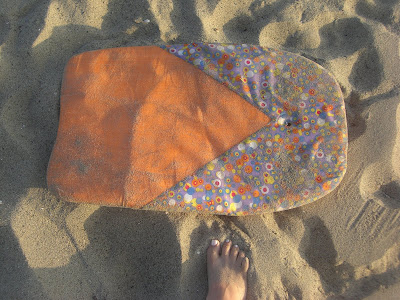 An old boogie board, soggy, broken and left behind. On the pier today I met a group of 4th graders and their parents who have formed an organization called PEACE TROOP. They used to be involved in Girl Scouts but have started to do their own thing, and today they worked for Surfrider. I was very excited to meet them. They are invited to participate in The Daily Ocean by coming out for a beach cleanup with me. And Team Marine will look into partnering with their elementary school in West Los Angeles. Today was a great day to be a part of things going on here in Santa Monica, and the greater Los Angeles area. 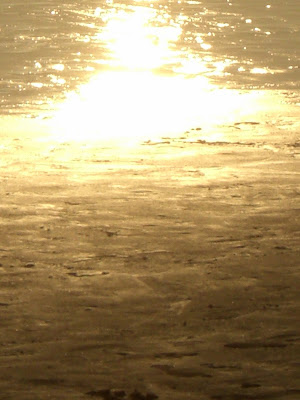 Hope you enjoyed today, it was the last day of summer. September can be an unbearably hot month here, but this weekend was just right. It is bittersweet to say goodbye to this season and enter into fall, but this is my favorite time of year. It feels full of possibilities, and full of forward moving energy to greet those possibilities as they develop.
Posted by Sara Bayles at 9:27 PM No comments: