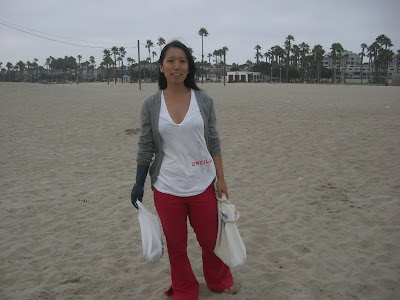 Siel (pictured above) of, green LA girl, came out to interview me in August and collect trash for 20 minutes.
We've put our heads together and decided to co-host an event in October.
THE BLOGGER BEACH CLEANUP, OCTOBER 24TH LIFEGUARD TOWER 26 OCEAN PARK, SANTA MONICA CA FROM 4:20 - 4:40
She has posted about it beautifully here.
And we have also listed it on the 350 website.
A group organizing internationally to get people to come out and act to help stop climate change.
Oct. 24th is my birthday and the International Day of Climate Action.
Won't you bend over and help us! We'll be collecting trash for 20 minutes.
There are prizes and incentives for all.
Lets get together and brainstorm how we can all do one small thing to change the way we live, and the world that together makes a landslide of difference!
Change starts with you, with us, come along and meet like-minded folks who want to make a difference. (Don't have to be a blogger to join us!!)
Posted by Sara Bayles at 11:46 AM 1 comment: 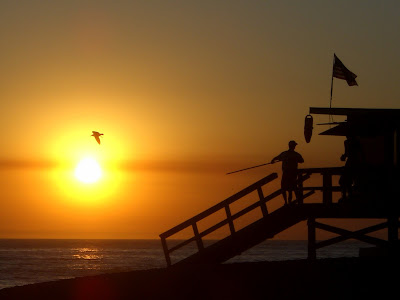 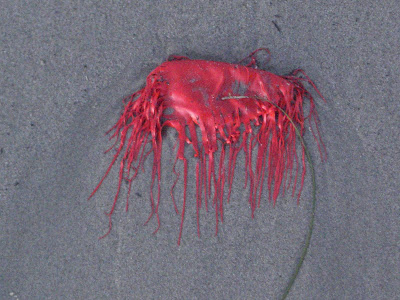 Is it a balloon, a jelly fish, or a creature from the deep? I think you know the answer....
My local paper is amazing, they run stories about beach closures on the front page.
From the Santa Monica Daily Press today : (they are running a story on The Daily Ocean in their weekend edition. Check their website to read it, they are an online paper too!)
BEACH CLOSURE
WILL ROGERS STATE BEACH Foul smell causes closure The Los Angeles County Department of Public Health has posted warning signs advising swimmers and surfers to avoid the ocean for a half-mile north and a half-mile south of the storm drain located at Will Rogers State Beach, near Pacific Palisades....more 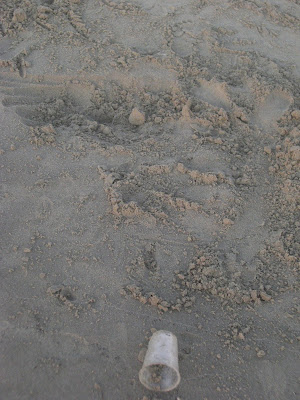 essay continued from Day 60 post:
But I do this for a few reasons. I feel better when I collect the trash, making it unavailable for marine life to get sick from. I find it enormously satisfying when I chase a gull away from eating a plastic bottle cap. 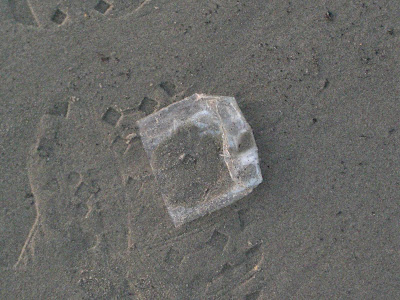 Sometimes I feel worse after collecting. If the sand is littered with trash that day, usually on Sunday nights, then I am depressed because sometimes I collect over five pounds in twenty minutes. Remember, the stuff I am collecting weighs ounces; cigarette butts aren’t heavy. 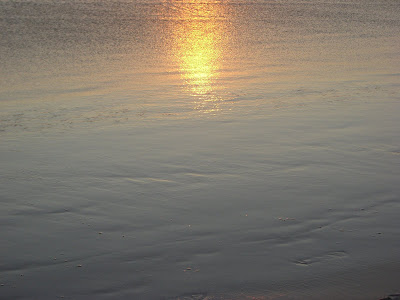 Here’s why I keep doing it though. This is my hope. I hope that people see what I am doing physically, or online and it inspires them to do the same. I hope that steady shifts in awareness sink in that cause people to change. And that all of this effort creates a slow and steady climax to the tipping point where people feel inspired to take action around whatever environmental issue they feel passionate about and that this passion becomes contagious. 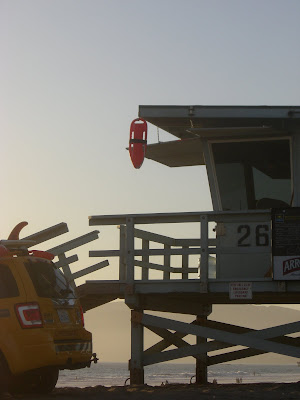 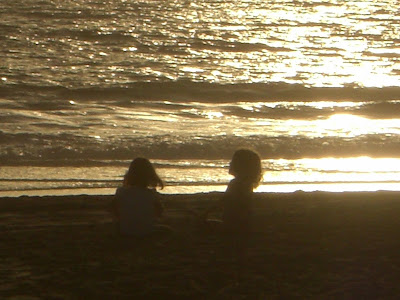 Today was a wonderful, and strange day to be out here. Santa Monica Daily Press came out to photograph me for the weekend edition of their paper. They are an online paper, so if you want to check on Sat. and see the article, click here.
I think I forgot to take as many pictures, or pick up as much trash, but I am very excited they are interested in The Daily Ocean. Thank you SMDP! 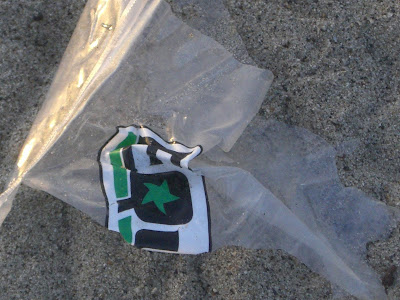 I wrote an OP-ED piece for the LA Times, they didn't want to run it, but I still like it. I'll include it in this post starting below:

As We Say Goodbye to Summer How Are We Leaving Our Beaches?

Who can imagine summertime without going to the beach? Even if you don’t live on the coast, just the thought of a beach probably brings to mind pictures of summer. For millions of people the time they spend at the ocean defines the season. Many of us have early memories of being a child there, discovering waves, chasing sea gulls, and building sand castles. 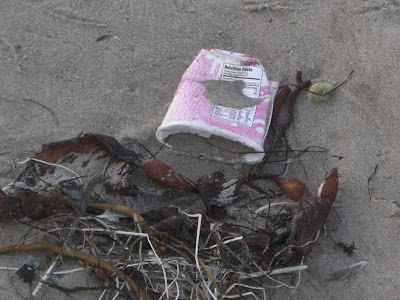 September 20th was the last official day of summer. Over the past weekend thousands of us probably headed out to the beach to enjoy the final moments before fall arrived. Some of us may have participated in “Coastal Cleanup Day” last Saturday sponsored in part by Heal the Bay, and The Ocean Conservation. “Coastal Cleanup Day” is a an initiative to raise awareness about issues of Ocean Conservation, like the huge problem of Marine Debris, by inviting people to participate in a nation-wide beach cleanup. 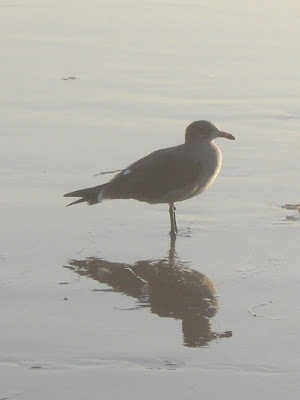 You may have noticed that we are literally trashing the beaches. Marine Debris is one of the largest problems affecting the health of the ocean. You may have also heard about the North Pacific Trash Gyre, an island of floating trash swirling in the middle of the Northern Pacific that is now twice the size of the continental United States.

How does all this trash end up in the ocean? Storm drains from urban coastal areas lead straight into the water. Without grates over most openings to catch the larger pieces of trash, all the litter that lands on the street gets swept into the sea. And that’s not all. Motor oil, dog waste, pesticides and fertilizers end up in there as well. This is a design that has always concerned me, and strikes me as particularly insane. 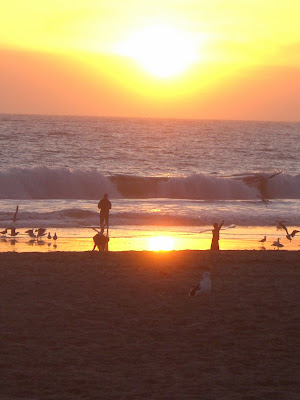 But storm drains aren’t the only way these items are getting to into the water. We leave a lot of the same items behind right where we were, on the sand. Recently I saw a California Gull swallow a Bic lighter whole. I was just feet away, and unable to stop it.

As we say goodbye to the end of summer I’d like to ask how are we going to leave our beaches? I am not naturally optimistic. But even though that is often how I feel I think the real question on my mind is that, if you know what is going on, and have informed yourself of even a miniscule amount of the ecological research available, how can you not do something?

I chose to start a one-person beach cleanup as a way to begin. I head to my local beach and for twenty minutes at a time, pick up trash off the sand. It started as a way to protect my own mental health, and has developed into a blog called The Daily Ocean as a tool to raise awareness.

If the same trash appears daily why do I return? Am I really stopping the trash from getting in the water or littering the beach? No, probably not. Let me explain, the trash I take away will only be back the next day. Basically the same stuff will return, and when I say the same stuff, I mean exactly the same stuff. Cigarette butts, plastic water bottles, band-aids, straws, food wrappers, tampons, sanitary napkins, condoms, bottle tops, and the occasional discarded flip flop are the most frequent items I find. And I find them day after day......... 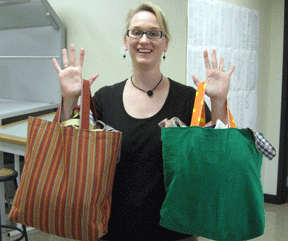 Teresa of Green Bag Lady, has contacted me and will be sending me bags to use for cleaning the beach, one for my neighbor who gives me single use plastic bags to collect in now, and a bunch for an event I am co-hosting with green LA girl ( http://greenlagirl.com/bbc/ ) more about the event in the next post. 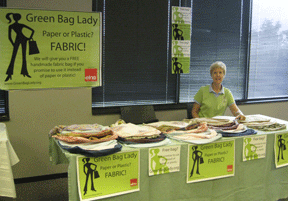 She lives in Tenn. and has started a project/blog that gives reusable, beautiful, sown fabric bags away to people if they promise to use them instead of paper or plastic. 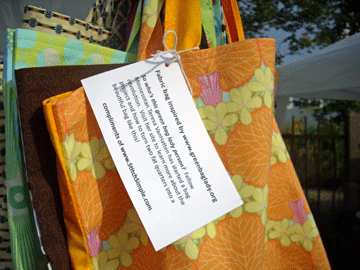 So far she has given away 6484 bags to people around the world. So cool!!
Thanks Teresa, click here for a link to her site.
Posted by Sara Bayles at 10:31 AM 1 comment: