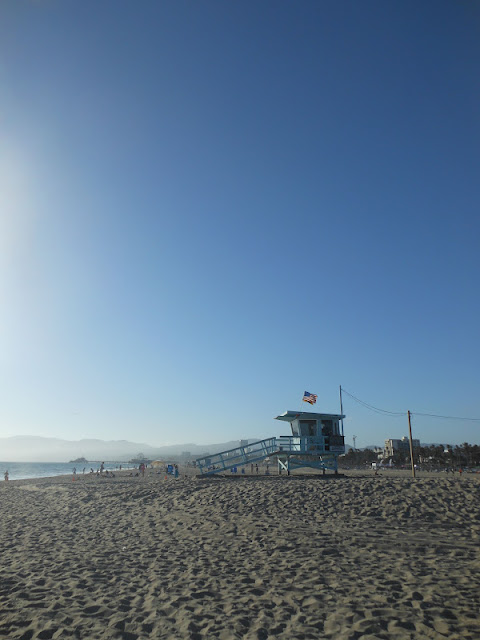 THE DAILY OCEAN COMBINED TOTAL - 2,106 POUNDS
Want to get involved?

Find out more about doing your own Daily Ocean 20 min. cleanup 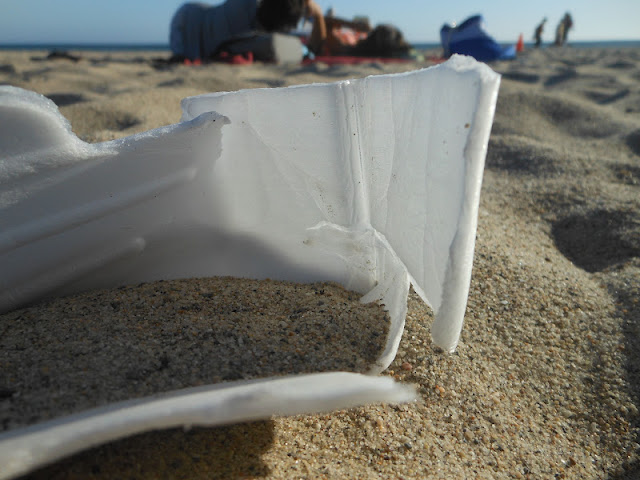 My inlaws put leftovers from our dinners together into styrofoam to-go containers like this one from Costco. that they buy in bulk. I've always felt torn about this. They seem to have moved to glass containers in recent months, probably from conversations we've had about plastic containers and what they leach into food. I showed them this photograph Sunday when I was at their house. "See what this is?" I said. They didn't answer really, but the point of the images I share is that hopefully a "picture says a thousand words." Images sink into our psyche in ways that are just as powerful as words.
Perhaps that's why I utilize both to talk to you. 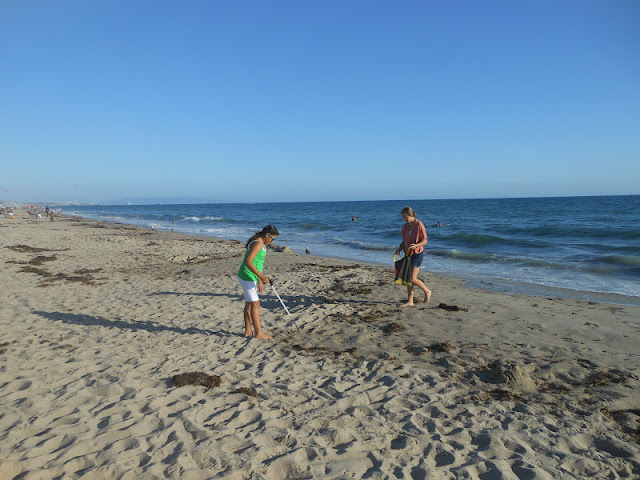 OK, so a BIG thank you to my friends Rita, Anne, Mikayla and Swan who spent part of their sunny Sat. night collecting modern detritus from the sand. Mikayla commented that, "It was surprisingly fun to clean the beach." Here-here sister!! 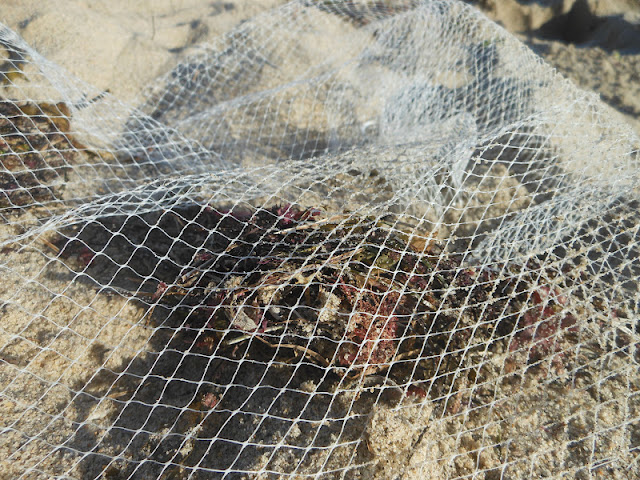 This mesh bag that may have once held some of the sand toys strewn across the place alarmed Rita. She knows that if this swath of plastic mesh gets blown into the water, it's going to take out some marine life with it. Marine entanglement due to discarded plastic trash makes me cringe too, not to mention what it does to the animals... 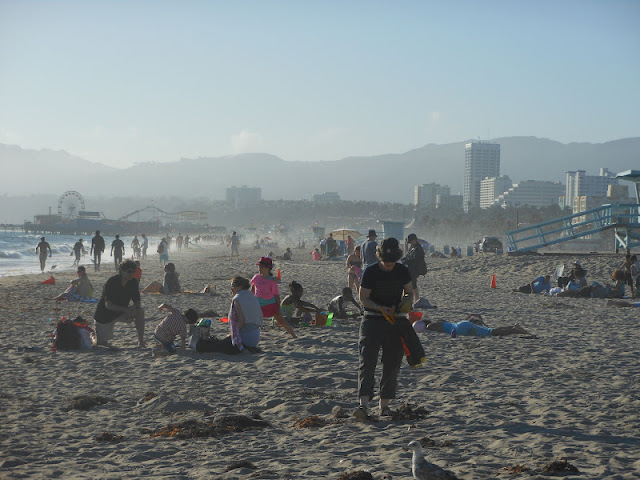 Anne on the sand giving it her all.,,

A German family came up to her and put some trash their kid found into her bag.
"What you are doing is really important," said the father. You can't see it, but I'm smiling. 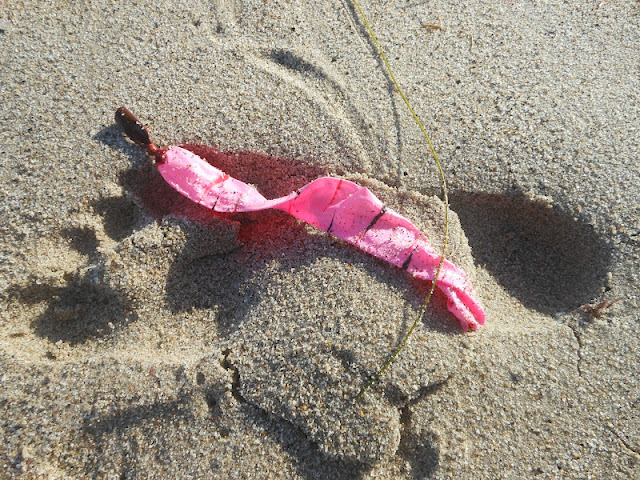 One thought I come back to again and again is that we just don't see it. I mean the collective "we." We walk right on by the trash on our street, in our neighborhoods, or cities, and so why wouldn't we do the same here? Besides the fact the beach is a sacred, beautiful, elemental place that invigorates us all.

But seriously, I think we've grown complacent to the trash that surrounds us. The natural world has not. 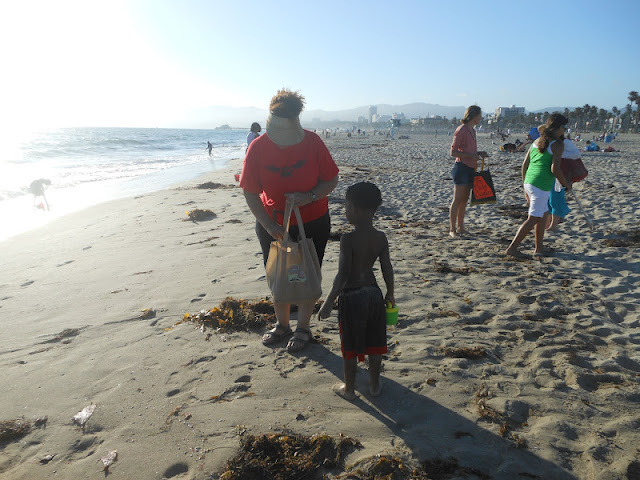 Rita and a recruit...

As I take this shot I hear, "Fishes and animals die when they eat plastic so we want to find all the plastic and pick it up so they don't get sick?" says Rita.

"Plastic? Fishes, all fishes get sick?" says the little boy.

"Yes, the birds and animals get sick if they eat our trash, see?" Rita shows him what's in the bag.

He and his friend join the hunt for plastic along the tide line for a minute or two. Every few seconds I hear, "Here's some, here's some!"

Kids are the greatest. 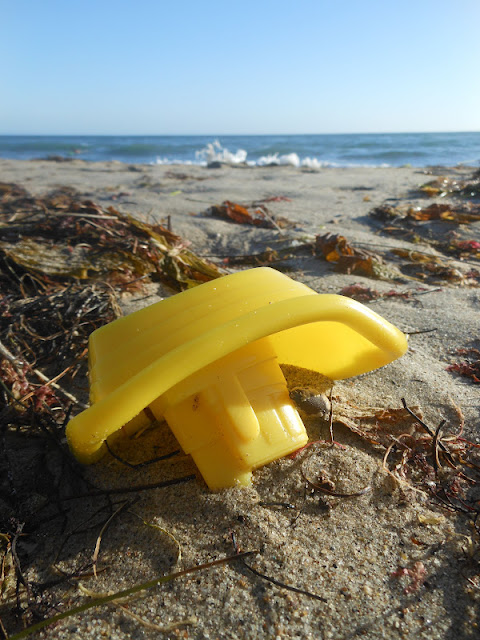 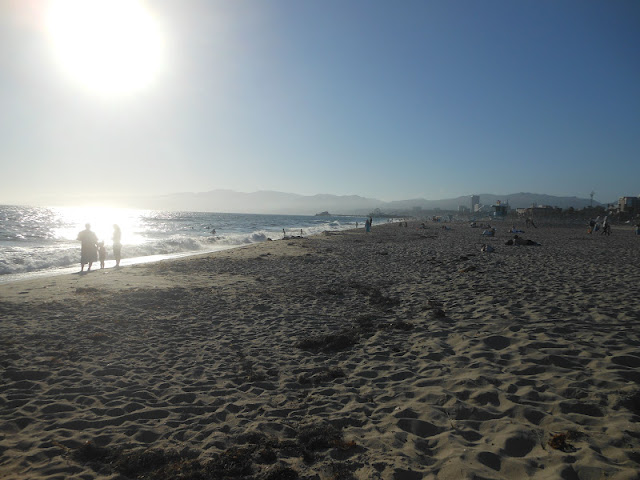 Saturdays, and weekends are hard in the summer. Lots of people enjoying the outdoors, the sand in their toes and bathing suits, the sun kissing their cheeks and shoulders....but with people comes trash, making my weekend collections hard to stomach.

I'm going out in a couple of hours to see the after effects of July 4th....

Posted by Sara Bayles at 5:31 PM No comments: Links to this post