Below are two pictures from a concerned parent, and reader of The Daily Ocean,
Wendy Chambers AKA goldensgreengirl. 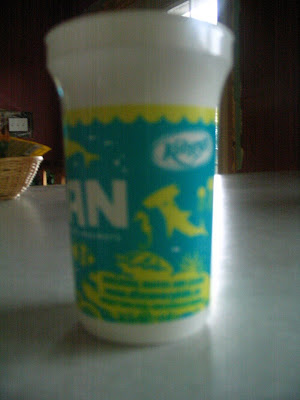 She contacted me a little while back with these thoughts:

A couple of weeks back I was visiting a family member in BC, Canada... at a restaurant named Kelseys.

I asked for a orange juice drink for my daughter and they gave me this cup.

I was totally astounded, this cup is made of polypropylene and has a depiction of abundant marine life on it !!! endorsed by Discovery Kids

- my first thought was this is a total contradiction and then this turned to anger...... I need help or advice in finding out how these marketing companies can get it sooooo wrong and get away with this producing this plastic cup with this image on? 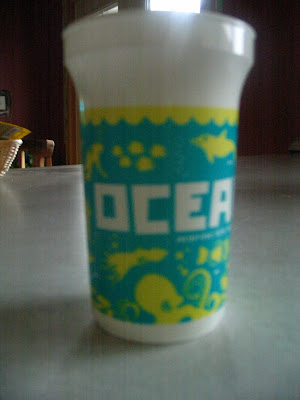 The "funny" thing was that on the very next day while walking on the beach with a friend in Santa Monica, I found the cup pictured below. 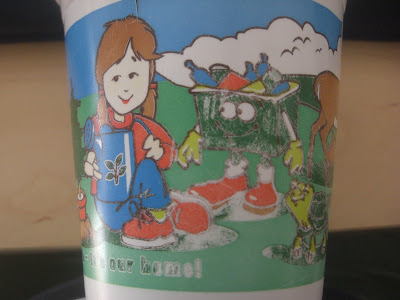 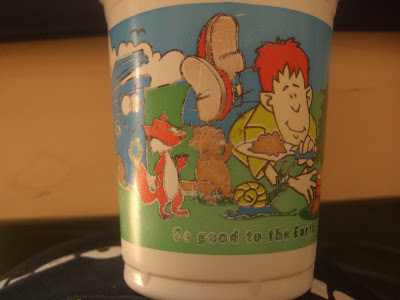 A group of woodland creatures has gathered around this red-headed boy, and brown haired girl to plant a tree. Other characters that have joined are two recycling bins with big smiley faces (creepy), and windmills in the background. WOW.
So I will ask you the same question. How do we influence corporations to stop "getting it so wrong" when it comes to environmental advertising geared towards the youth, and well polluting the environment at the same time?
Posted by Sara Bayles at 6:56 PM 3 comments: Links to this post

My friend Debbie put me in touch with her friend Sarah Nan in Florida. Above is a picture of what her local ocean view is.
She has emailed me pictures, and an account from a recent river cleanup that she did. Reading is believing. I've attached her email to me below in parts. 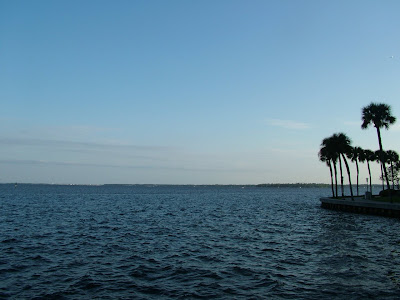 "I just did a clean up in March at McCoy's Creek in Jacksonville, Florida for the 15th Annual St. Johns River Celebration. 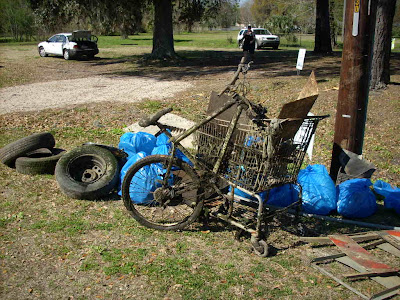 We pulled out 24 tires, a mattress, box spring, two shopping carts, and 23 large bags of litter (six of those bags were nothing but plastic bottles), a very large tv, a bike, and a semi- truck hood out of the creek . This all came from one tiny area (about 900 feet). 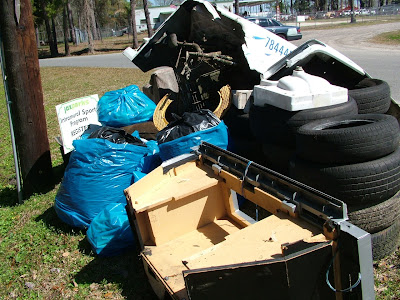 I am also doing a cigarette scan tomorrow around a local hospital that has banned smoking on campus, and have a very bad cigarette litter issue that needs to be addressed. The last scan at the hospital, we had picked up 10,000 butts from a small area, right next to the river. - (really? wow that is just totally absurd!!)

Posted by Sara Bayles at 6:12 PM No comments: Links to this post 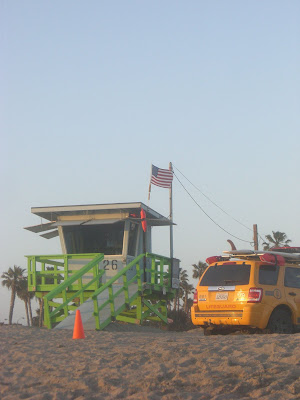 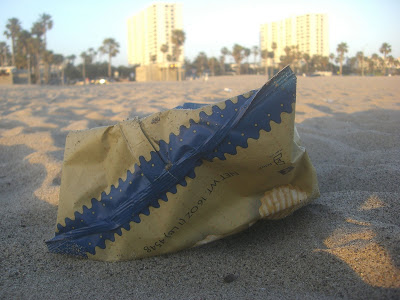 This potato chip bag was taken out of the trash can by a sea gull as I watched.
Solution? Trash cans with lids for the 10 - 15 of them that line the beach between life guard towers....I know Santa Monica is working on it, but until then, see above.
Today I played with my new Kodak hand held video camera. I had captured the gull ripping at a plastic bag inside the trash can, (don't worry, he didn't get it out, or eat it, I stopped him), and I was all ready to play with video blogging when I pressed a formatting button on my camera this morning sitting here at my desk, and presto, promptly erased everything I shot from last night's cleanup.
Note to self - when reading manual PAY ATTENTION to what the buttons are for instead of randomly pressing them WITH the manual open. Rats. 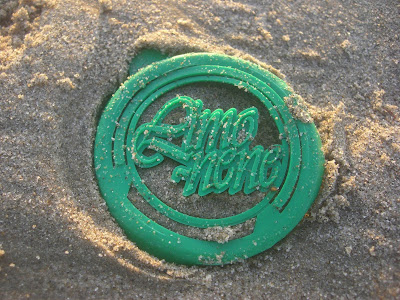 A top to...something made of plastic and it looked like it had washed in from the bay.
Like so many people around the world, I'm focused on the BP Gulf oil spill that happened recently. My inbox has been flooded with different environmental organizations weighing in with emails to drum up volunteers, or raise funds to help them battle this disasturous spill.
Global Green is an organization based in Santa Monica that opened their New Orleans office in response to Hurricane Katrina. They have set up a way to volunteer through their website, here's the link. And also - as you can imagine - had a thing or two to say that I pass on here.

"We mourn first for the 11 immediate victims who lost their lives when BP Oil's deep drill rig exploded last week. These hard working Americans, just like the 29 coal miners recently killed in West Virginia, lost their lives to provide us with the energy we need to maintain our modern lives by working in one of the world's most dangerous industries - carbon intensive energy production.

We are just now starting to consider the second wave of victims as millions of gallons of oil begins its march - without apparent end - onto Louisiana's shores, as well as our Gulf coast neighbors. The impact will likely include:

And may I add, there was a safety shut off system for the oil well that was not installed because it was deemed too expensive......now we face a diaster possibly much worse than the Exxon Valdez spill....expensive in so many more heartbreaking ways than I can wrap my head around. 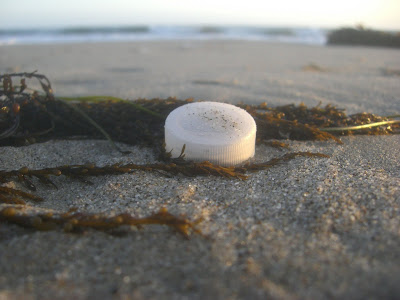 I find so, so, SO many plastic bottle caps on the beach.
Learn more about the CA Assembly Bill 925 to leash the lid to the bottle. There's been some progress to get this thru the legislature, but we'll need your support. I'll have updates on this bill as it goes through the process into, hopefully, becoming a law...at least in California.
read more here - "Since 1989, the start of data collection for Coastal Cleanup Day, 1,044,414 bottle caps have been collected from the state’s shorelines and waterways..." 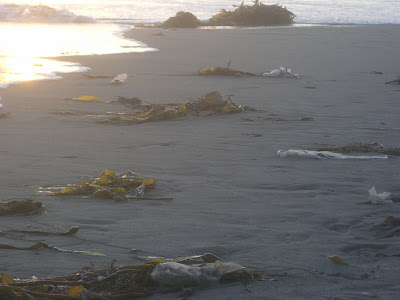 The water line was littered with clear plastic wrappers, straws, food packaging, and plastic bottle tops tonight.
I collect from the same strip of beach every time.
I go to the beach at the end of Ocean Park Blvd. in Santa Monica and walk straight out to life guard tower 26, then turn left and head south to tower 28.
On a "good" day, I walk there and back in 20 min..
On a bad day, like today, I walk 100 feet down from tower 26.
The distance between tower 26 and 28 is at least 2 football fields in length.... 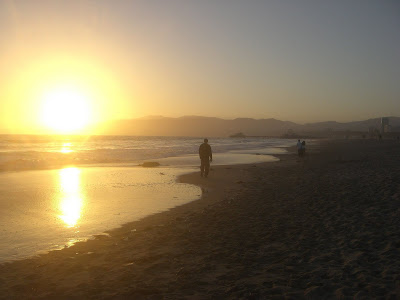 Two things to end this post.
1. Carl Safina's blog entry on the oil spill. Like I said thru TWITTER, he is one of my ocean heroes.
2. Food and Water Watch's Seafood Guide. It gives you alternatives to some of your favorite fish that are no longer a safe choice for you, or the environment. Check it out.
Posted by Sara Bayles at 10:47 AM No comments: Links to this post