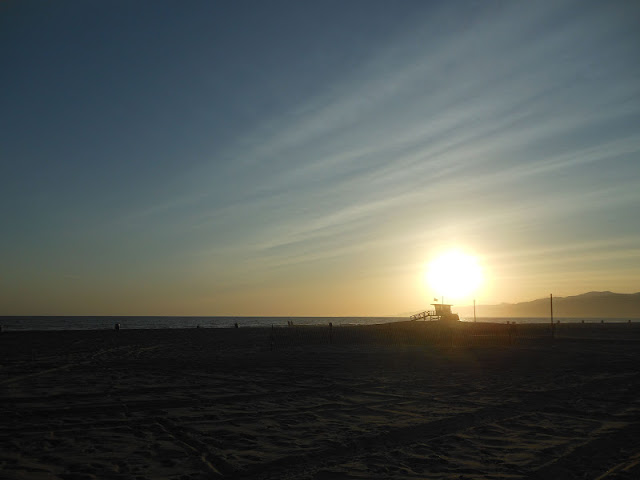 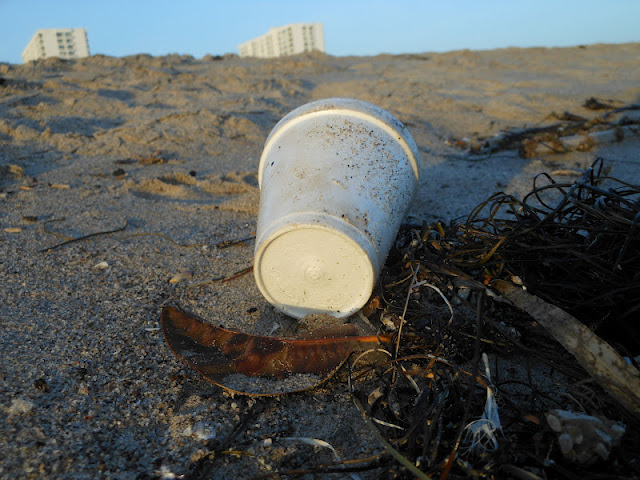 I've got some good news to share! Whole Foods has banned the sale of all seafood, "not deemed sustainable by organizations such as Monterey Bay Aquarium and the Blue Ocean Institute." Surfrider included this hopeful news tid-bit in their online e-newsletter SOUP. You can't see it, but I've got a big old smile on my face. Thank you Whole Foods! 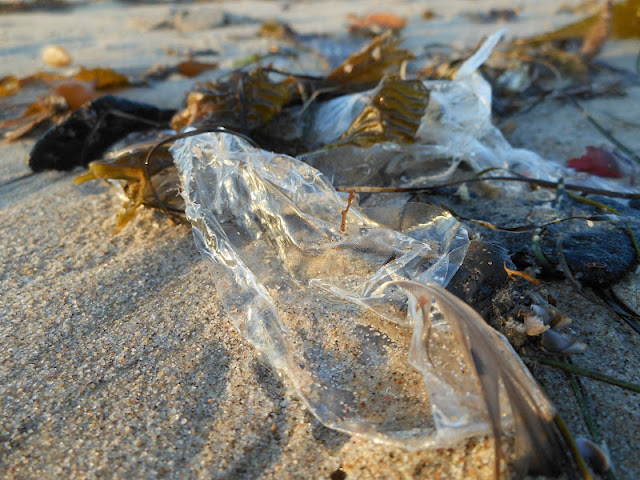 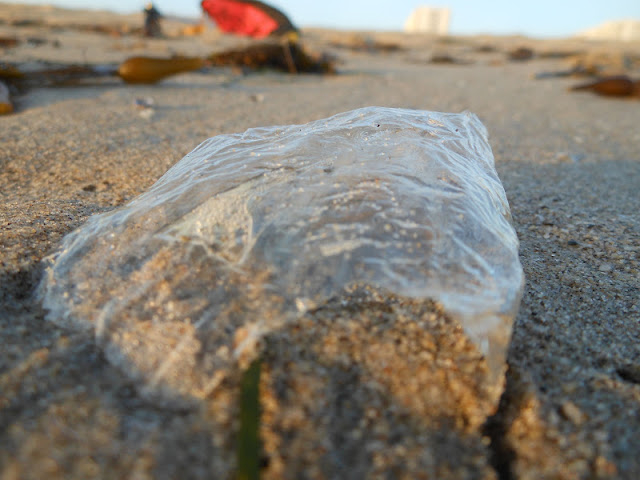 is a whole s*&t ton of plastic. 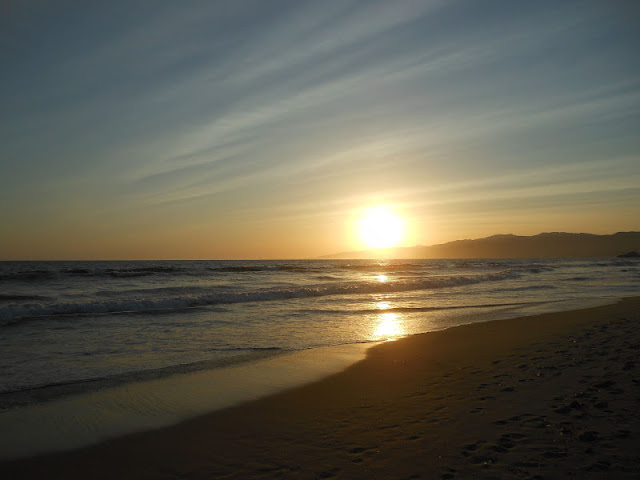 Posted by Sara Bayles at 8:48 PM 4 comments: Links to this post 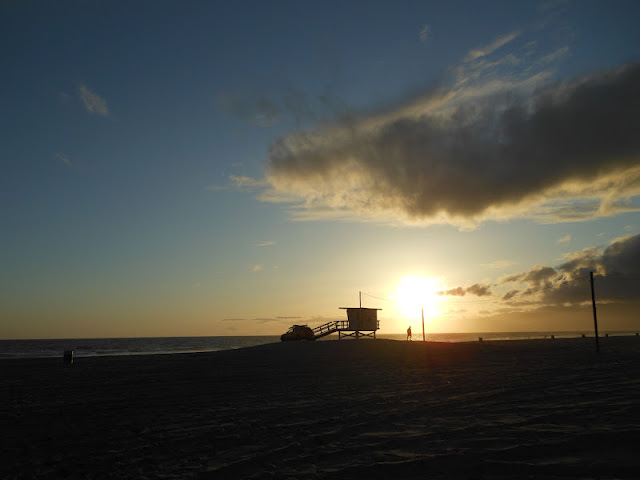 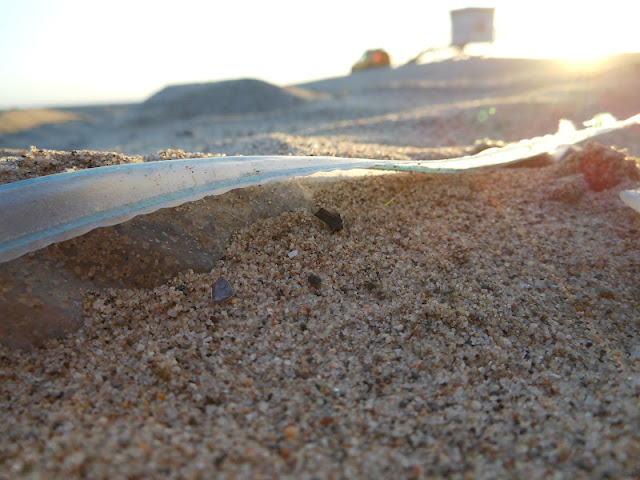 I found only 5 cigarette butts tonight during my 20 minute beach cleanup.
Danielle who writes, "It Starts With Me" found 212 last time she went out to her North Carolina beach. We're keeping count to show the difference between a beach where smoking is banned and one where it's not. Hopefully our findings will help sway local government officials in N.C. to adopt a no smoking policy for their beach. Want to count on your own local beach? You're welcome to join us! 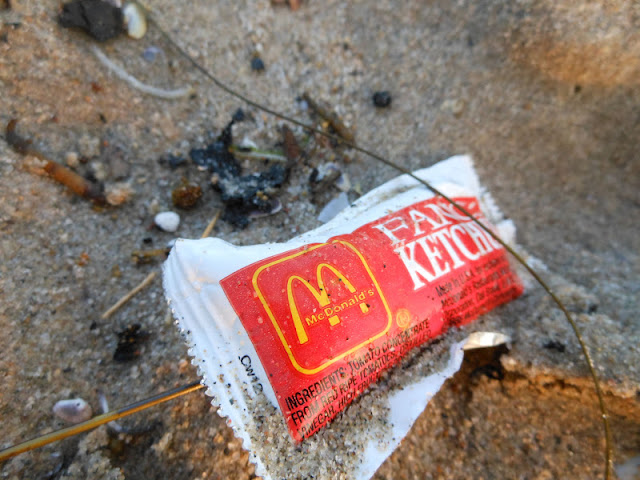 I found three of these packets tonight spaced out along the beach.

A friend passed along this video to me on twitter this week. They call themselves the Litter Grabbers. Their video documents what they found on their stretch of sand, it's a little spoken word, a little video art, and a whole lot of creative energy. 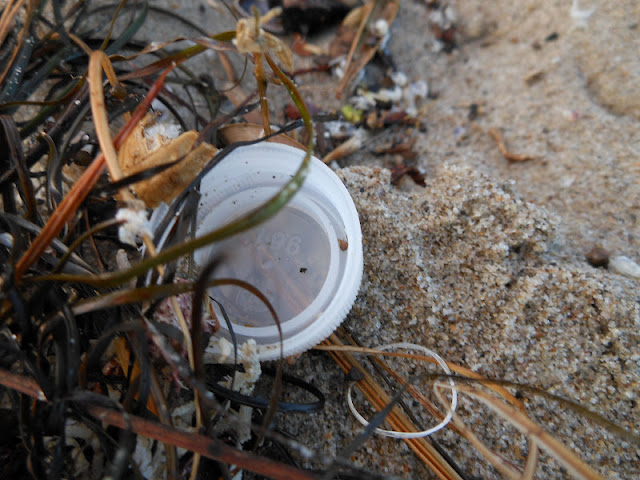 It took me awhile to get back out on the beach after our trip to Honduras. While on the island of Utila we saw a whole lot of trash on the beach, and some floating along the top of the ocean as we made our way out to different dive spots. What we didn't see were the Whale Sharks we'd traveled for, sea turtles,  dolphins, whales, sharks, many fish and very few sea birds. It hit me hard in part because this is the third ocean in a year where we've seen coral reef damage and an absence of abundant, healthy marine life. What do I do with my experiences? Part of my personal solution is to write this blog. And so tonight, it felt good to be back in the swing of it, on the beach at sunset, watching three pelicans stream by, and one leaping sea lion. I love Santa Monica. I love the ocean. I love this planet we've got. 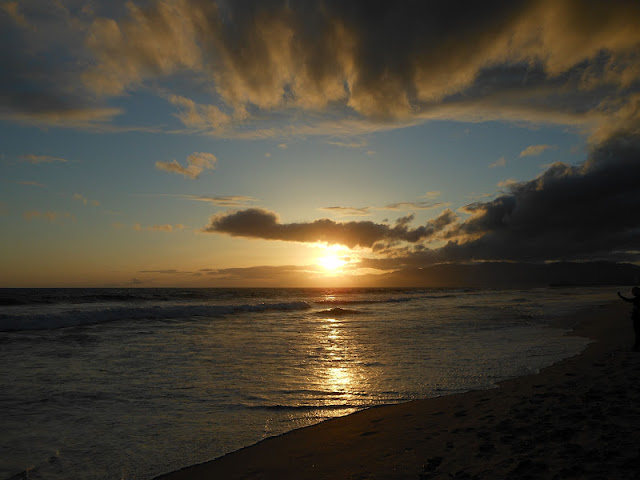 
Posted by Sara Bayles at 9:31 PM 6 comments: Links to this post 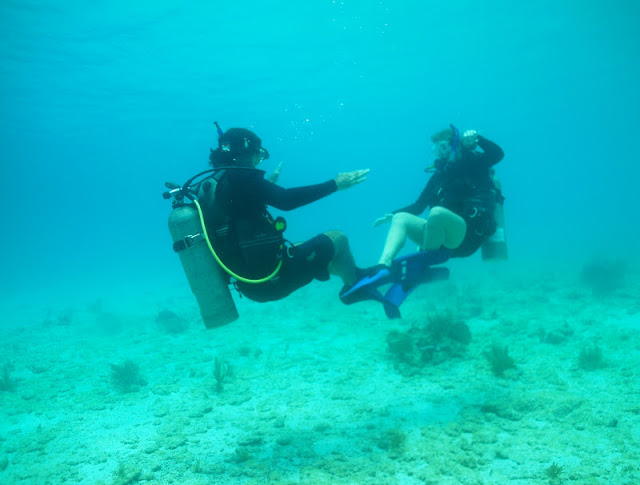 Garen and I playing with our buoyancy
photo credit: Mike Carson
It's a good thing that we like seeing a lot of each other because that's basically all we saw underwater. I wish this were a funny exaggeration. It is not. While the people who happened to be staying at the Laguna Beach Resort were well worth meeting, and getting to know, we also assumed that we'd be mingling with some marine life. We were wrong.
No one was home, or at least this is the eerie impression my week on the island of Utila in Honduras left me with.
There were folks on our dive boat who had done their research on Whale Shark migrations to optimize their chances for interaction with the world's largest fish. It came down to April being the best month to see them, while narrowing further to the week were were there. And, turns out, there's no other place better than Utila to find these friendly fish.
As the week progressed and the situation became clear, I resigned myself to the possibility that we'd come all this way and...no one was home. We should have seen 5 or 6 Whale Sharks at a time, according to locals who were dismayed that the Whale Sharks were not around. This was the second season of its kind, being even worse than last year.
We should have also seen sea birds, gulls, and Pelicans. I saw three Pelicans all week long. Two Terns followed our boat....ONCE. In short, the skies were empty.
Under the water any better? You may be wondering.
No.
List of animals we did not see, clocking 12-16 hours underwater in total. Oh, and no one else on our boat saw them either.
1. sea turtles of any kind
2. reef sharks or any kind of shark
3. Whale Sharks
4. dolphins
And the fish population on the reefs (that were also in rough shape) were very low. Our friend said he was surprised at how, "mediocre the diving was." I think he put that lightly.
I came home with a heavy heart and have been taking the last few days to process our experience.
Garen and I agree with the locals hypothesis that the absence of life around the Bay Islands is due to the BP Oil Spill. Garen believes that it would take a couple of seasons to see the effects. What those direct effects are could be many. I wonder if the plankton, krill and small bait fish that migrate through the Gulf could have been wiped out by the toxins and oil sludge saturating their waters?
If so, there's no food off the coast of Honduras for the big guys, the birds, the dolphins....
Whatever the reason, I'm home from our "Spring Break" trip reeling at having witnessed such a degraded marine environment.
I'm sure the owners of the resort who are slicing open the wetlands to expand their empire and contemplating Lobster Farming are taking their potential environmental impacts into full account.
I wouldn't go back, I would tell others not to go as well, although it makes me sad for the kind people who live and work there.
I'm not sure how to end this rather atypically long, and emotional post. I'll leave you with this.
Mike, Linda, Garen and I spent 15 minutes walking the edge of the property. We filled a wheel barrow that threatened to brim over with single-use plastics. There was that too. I just couldn't bring myself to even take out  our camera to document the Coke, Pepsi, Water Bottles, syringes, aerosol cans, flip-flops and other detritus washing up from the clear blue Caribbean.
Paradise it was not.
Posted by Sara Bayles at 2:17 PM 8 comments: Links to this post

BEACH CLEANUPS TO RESUME AFTER AN ADVENTURE! 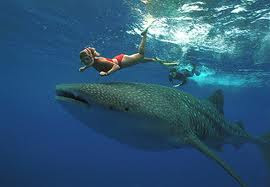 We're off on an adventure to Honduras in search of Whale Sharks who will allow us to tag along. Lucky for us, we've heard they're easy to find where we're going.


Our house is being "sat" and our dogs are at Garen's parents. They get such royal treatment there that when it's time for them to come home they look at us like, "Who are you again?"


Daily Ocean beach cleanups will resume after the 15th!
Posted by Sara Bayles at 12:08 PM No comments: Links to this post 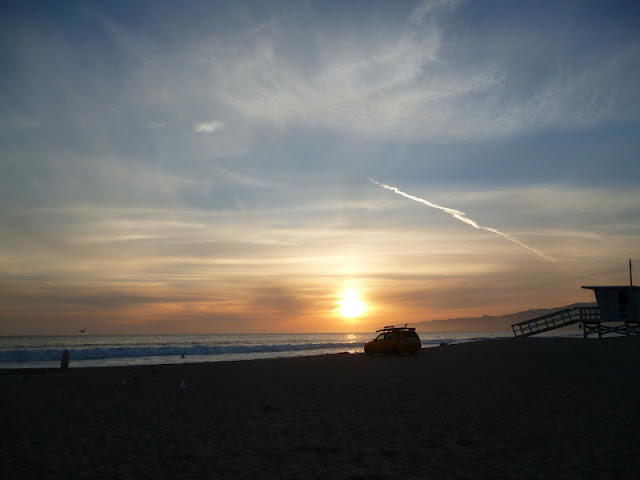 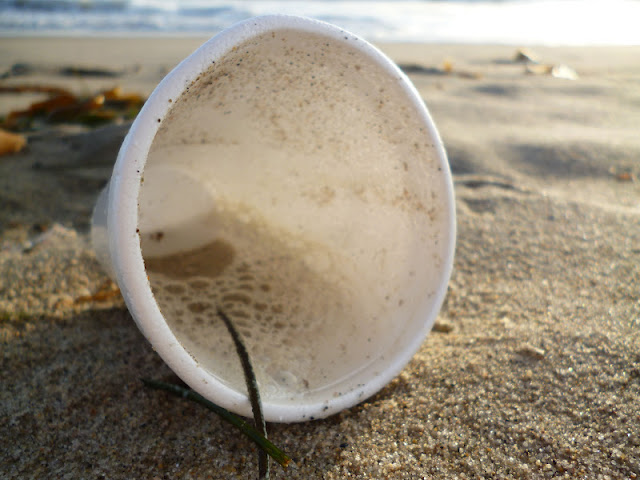 Since I've passed the 1,000 pound collection mark, I've been thinking about how many ounces, or factions of an ounce, the trash items I find weigh. The lightweight material of plastic film food wrappers, styrofoam cups, cigarette butts, and bottle tops adding up to over 1,000 pounds says "volumes" for how much single-use crap we circulate through our lives. 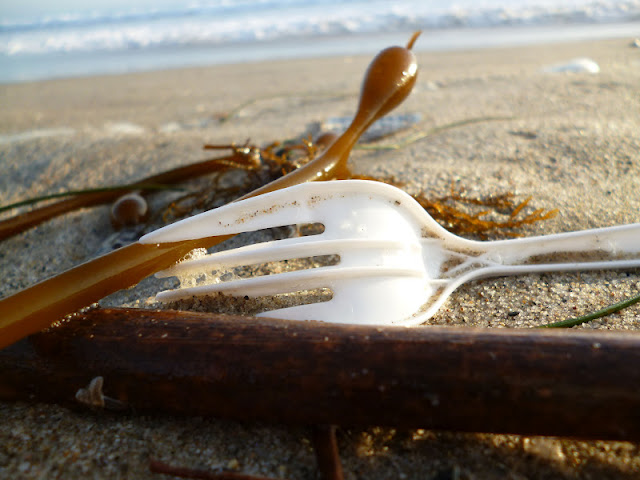 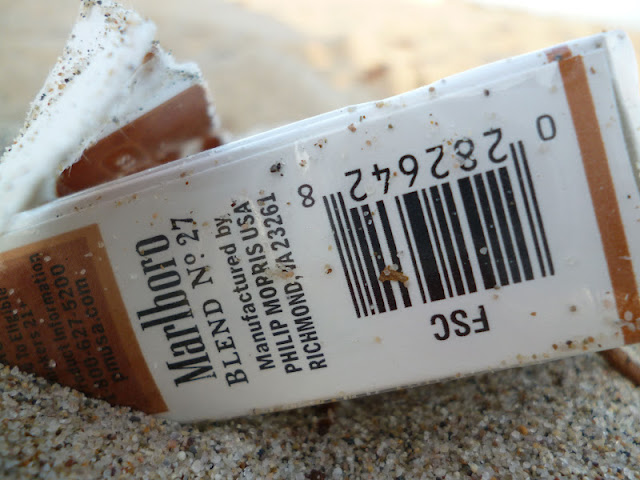 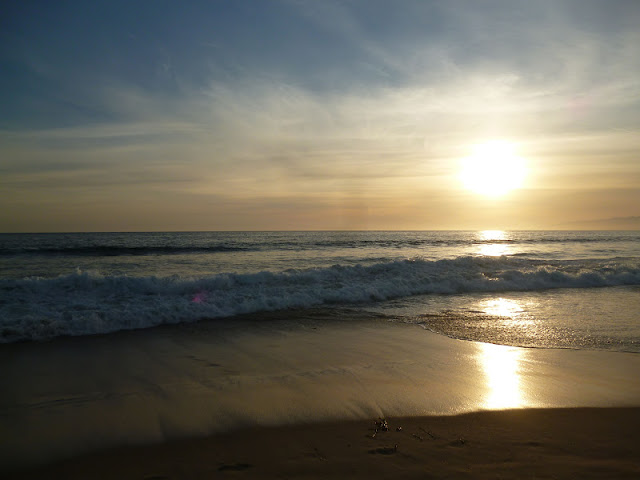 The beach in Santa Monica where I've collected the 1,000+ pounds (I go to the same one every cleanup) is raked in the morning for trash. I know of one other diligent elderly couple who collects trash from this stretch of beach nearly every morning as well. 26 as it is commonly known, is not considered a dirty beach, but a well loved one. I chose this location because it is down the street from our house.


One average beach
One person
One 20 minute beach cleanup every few days
3 years
One thousand pounds of trash taken from this small stretch of sand and counting....


Posted by Sara Bayles at 7:21 PM No comments: Links to this post